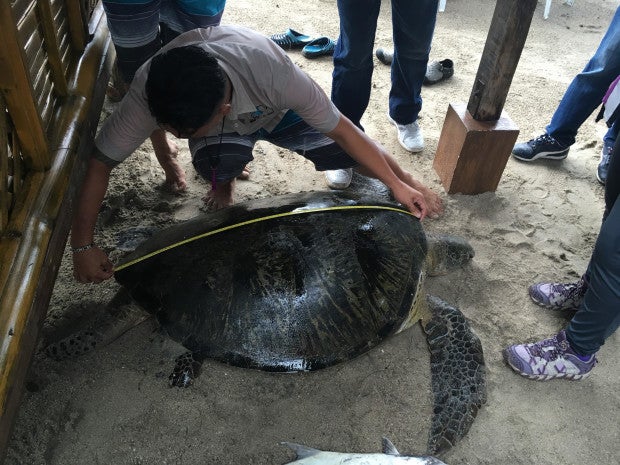 An 80-kilogram dead male green sea turtle (Chelonia mydas) being examined by personnel of the local non-profit organization Wildlife in Need Foundation. The animal’s carcass washed up near the shoreline of a beach area inside the Subic Bay Freeport on Thursday (August 18). ALLAN MACATUNO/INQUIRER CENTRAL LUZON

The sea turtle (pawikan), about 80 kilograms, was found floating near the shoreline of All Hands Beach at 2 a.m., said Marife Castillo, chief of the Community Environment and Natural Resources Office in Olongapo City.

Castillo said they have yet to determine how the animal died. “I’ve requested for a necropsy… since a large dead talakitok (cavalla) was also was found floating in the same area,” Castillo said.

This was the first time a green sea turtle was seen in Subic Bay area, a known nesting site for other pawikan species, such as olive ridley (Lepidochelys olivacea) and hawksbill (Eretmochelys imbricata), Castillo said.

The animal’s carcass was brought to the center of the local non-profit organization Wildlife in Need Foundation for initial examination.

The animal was later transferred to Ocean Adventure theme park for further study.

Dr. Leo Suarez, veterinarian at Ocean Adventure, said the animal could have been dead for the last 10 hours before it was discovered. JE/rga