Pacman to Drilon: If you survive 3 rounds, I’ll answer your question 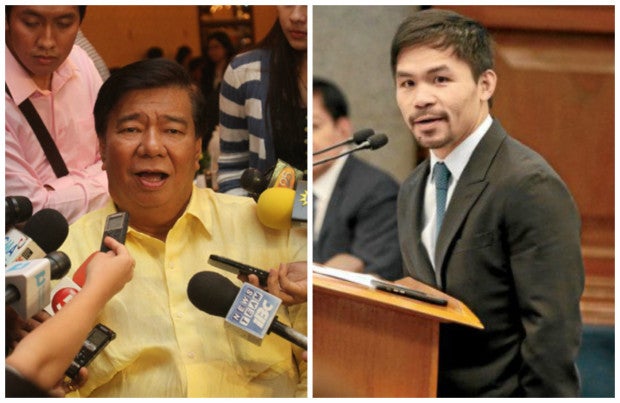 It’s the world boxing champion versus the “Big Man” at the Senate on Wednesday.

The face-off happened after neophyte Senator Emmanuel “Manny” Pacquiao sponsored a resolution on the floor, commending and honoring Filipino weightlifter Hidilyn Diaz for winning a silver medal at the 2016 Rio Olympics.

After Pacquiao’s sponsorship speech, Senate President Pro Tempore Franklin Drilon stood up and asked the neophyte senator if he could entertain some questions.

But the boxing icon was apparently hesitant to take questions from the vetaran senator.

After prodding by some colleagues, Pacquiao returned to the floor and said: “Mr. President, I’m willing to yield (to some questions from my colleague) if he can survive three rounds.”

It turned out later that Drilon just simply wanted to ask Pacquaio if he was willing to give Diaz cash incentives from his own pocket. After all, the Senate has approved Drilon’s motion to give the silver medalist a cash incentive from the savings of the chamber.

“So Mr President, Ms. Diaz has dreams for the country and for the youth…and she intends to put up a gym where the aspiring athletes can follow her example so in this regard that we’d like to ask Senator Pacquiao, pwede po bang magbalato sayo si Hidilyn (would you give Hidilyn a cash incentive from your own pocket)?”

Responding to Drilon’s queries, Pacquiao reiterated his promise to give Diaz cash incentives from his own pocket.

READ: Pacquiao mulls granting Diaz incentives from his own pocket

“Definitely, I will give Hidilyn Diaz incentives from me, from my own pocket but I will not announce it because it’s personal,” he said.

Drilon thanked his colleague and asked in jest if Pacquiao could triple the amount the Senate would give to Diaz. RAM