Dela Rosa: No investigation can stop PNP’s war vs drugs 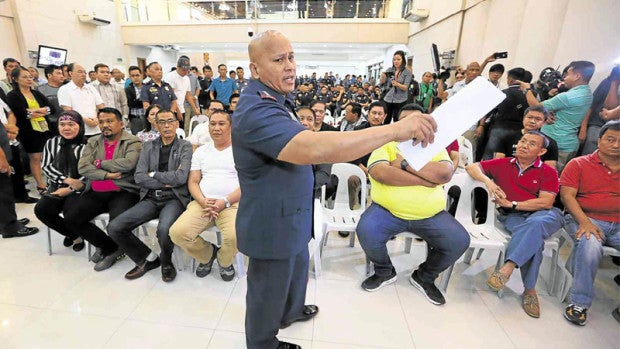 With clean hearts and untainted consciences. That is how Philippine National Police chief Ronald “Bato” dela Rosa and top police officials will face the Senate when it conducts an inquiry on the increasing number of extrajudicial executions amid the government’s drug war, he said.

The Senate has summoned Dela Rosa and other PNP officials to explain the recent spate of summary killings in the country since the Duterte administration’s intensive drug campaign came into full swing last June.

The probe on extrajudicial killings is scheduled on August 22 and August 23.

Dela Rosa thanked his former boss, Senator Panfilo Lacson, an ex-police chief, who earlier advised the police to keep their cool when the senators grill them during the inquiry.

“We will go there to the Senate with open hearts. Our hearts are clean. Hindi po tainted kaya wala po kaming itatago. Hindi kami magpapanic and we will never lose our cool. Unless siguro na babastusin kami, hindi naman siguro ganun, honorable naman yung mga senators natin. But in every action there is a corresponding reaction. Kapag binastos ka, we may probably lose our cool pero kung friendly naman sila at hindi gaanong hostile, what’s the reason for us to lose our cool,” he said.

(We will go there to the Senate with open hearts. Our hearts are not tainted so we have nothing to hide. We won’t go into panic and we will never lose our cool. Unless perhaps we are insulted, but that probably won’t happen, our senators are honorable. But in every action there is a corresponding reaction. If we are insulted, we may probably lose our cool, but if they are friendly and not very hostile, what’s the reason for us to lose our cool.)

Lacson on Monday expressed concern about his colleagues grilling the police, saying the probe might affect the PNP’s momentum in its “historic” drive against drugs.

But unlike Lacson, Dela Rosa is unfazed by investigations by different institutions criticizing the police’s bloody drug war. Over 600 drug suspects have been killed since President Duterte took office.

“Kahit na anong imbestigasyon dyan (Whatever investigation) that will come our way, we are determined to finish this in six months,” he said.

“I don’t care kung ano mang (whatever) investigation ang dadating dyan (comes along). I will continue to motivate my men to exploit the momentum. The momentum is on our side. We don’t have to slow down. Continue the fight,” the police official added.

Dela Rosa said they will not hide anything during the probe, adding that their willingness to show up at the Senate is a “sign we are true to our words and true to our deeds.”