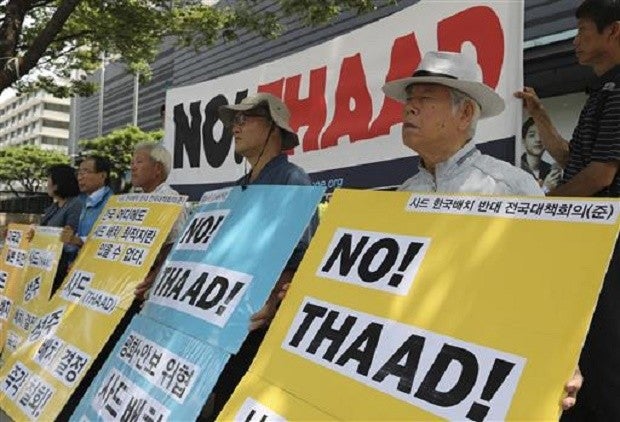 South Korean protesters hold signs during a rally denouncing a plan to deploy an advanced US missile defense system called Terminal High-Altitude Area Defense, or THAAD, near US Embassy in Seoul, South Korea, Tuesday, July 19, 2016. North Korea on Tuesday fired three ballistic missiles into its eastern sea in an apparent protest of South Korea’s decision to allow the deployment of an advanced US missile defense system in the country, Seoul officials said. The letters read “Stop, to deploy the Terminal High-Altitude Area Defense, or THAAD.” AP

BEIJING — The US Army chief of staff is visiting China amid tensions over American ally South Korea’s decision to deploy a powerful missile defense system.

The Army said Gen. Mark A. Milley was due to meet Tuesday with his Chinese counterpart and other senior People’s Liberation Army leaders to find ways to work on cooperation while handling differences.

Milley will also visit the PLA’s Academy of Military Science.

China has objected strenuously to a decision to base the US Terminal High Altitude Area Defense, or THAAD, system south of the South Korean capital Seoul, believing it’s X-Band radar is intended to track missiles inside China.

Chinese state media have published daily attacks against the US and South Korea, and China has cancelled events involving South Korean entertainers.