De Lima: Killings may lead to charges of crimes against humanity 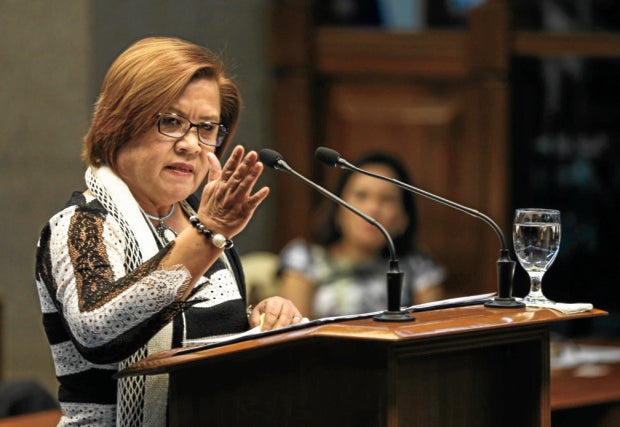 Senator Leila de Lima on Monday said that President Rodrigo Duterte may be charged with crimes against humanity at the International Criminal Court (ICC) in The Hague for the spate of drug-related deaths which have increased since Duterte assumed the presidency.

De Lima said that while she does not intend to threaten the President, she said that the drug-related deaths in the country could constitute crimes against humanity as there has already been “widespread” and “systematic” use of force against civilians.

“There are some experts who are saying that…if this spate of killings go unabated and unchecked, it could reach that point that the ICC could send a prosecutor to our country and investigate all these for possible prosecution under the Rome Statute. That is not a joke. The last thing we need right now is for our dear President to be subjected to an investigation by an international tribunal like the International Criminal Court,” De Lima said in a roundtable interview with Inquirer editors and reporters.

“I am not threatening the President. I am just stating a fact,” she clarified.

She said that the drug war of the administration can be described as “widespread” with the fact that hundreds of suspects have died in summary killings and anti-drug police operations.

“The element of the crime against humanity that is ‘widespread’ is already present. We have more than a hundred, almost reaching a thousand [deaths]. I think it is not debatable that it is now widespread,” De Lima said.

On the other hand, De Lima said that the “systematic” element of the offense may have been deemed satisfied by the statements of the President and Philippine National Police (PNP) chief Ronald dela Rosa which seem to justify the government’s anti-drug war.

“The systemic element [of the crime] is said to be the one that is difficult to prove because of the State and the leaders’ deniability. But then, the pronouncements of the President and PNP General [Ronald] dela Rosa, from the campaign period until now, may be considered as evidence,” the senator said.

Duterte will not be shielded from immunity once he faces the charge at the ICC, she added.

The prosecution of the President at the international tribunal is one of the scenarios that De Lima wants to be clarified by the Commission on Human Rights (CHR) in the two-day inquiry on the killings that will be conducted on Aug. 22 and 23.

The senator reiterated that the inquiry will focus on “seeking the truth,” adding that she only wanted to help the President in busting the drug menace.

The Philippines is a signatory to the 1988 Rome Statute of the ICC which punishes heads of state should they commit crimes against humanity, genocide and war crimes.

Justice Secretary Vitaliano Aguirre II  earlier downplayed the threat of an international rights case against the President for the deaths of hundreds of drug suspect.
“Criminals are not humanity. Crimes against illegal drugs, [maybe],” Aguirre told the Inquirer in a text message last week. RAM/rga

READ: Aguirre: Int’l rights suit vs Duterte? No way, ‘criminals are not humanity’