'Whatever his decision carries, only he himself has to answer' -- rebel group
By: Ryan D. Rosauro - @inquirerdotnet
Inquirer Mindanao / 10:50 PM August 14, 2016 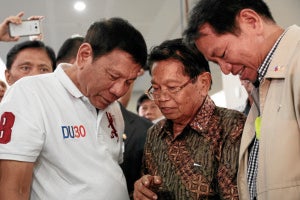 OZAMIZ CITY – They suffered the same under the strongman rule of Ferdinand Marcos, but two revolutionary groups have differing stance on the issue of burying the dictator in the Libingan ng mga Bayani.

President Duterte has unleashed a firestorm recently when he ordered preparations for the burial of the late president in the heroes’ cemetery.

Deposed in a 1986 popular uprising, Marcos died in exile in 1989 in Hawaii. In 1993, his body was brought to his hometown in Ilocos Norte where it now lies in state in a refrigerated crypt.

A succession of presidents after the 1986 uprising have steered clear of the question of according Marcos a hero’s burial, until Mr. Duterte came to power last June 30.

Principally, objections to Marcos’ burial in the heroes’ cemetery stemmed from the human rights violations committed during his reign as president, especially during Martial Law, and his amassing ill-gotten wealth from the country’s coffers which up to this day is subjected to a number of court cases.

Activists also dispute Marcos’ tag as a war hero, citing accounts of his faking of war medals and other accolades.

The group cited that the Moros “suffered the most numbers of killed or victims during the height of Martial Law, in particular those victims of massacres.”

“Besides, whatever his decision carries, only he himself has to answer,” it added.

Mr. Duterte has said that Marcos can be buried at the heroes’ cemetery because he was once a soldier and a president.

But the leadership of the Maoist rebels “condemns” such a burial plan.

In a statement released Saturday night, the CPP said a Libingan ng mga Bayani burial for the former strongman is tantamount to “virtually deleting Marcos’ bloody record as a military despot and the fascist violence, human rights violation, corruption and economic hardships he made the Filipino people suffer through 14 years of dictatorship.”

The CPP lambasted Mr. Duterte for being “bull-headed with his decision to give Marcos a hero’s burial at the Libingan ng mga Bayani.”

Such insistence, the CPP said, “reveals his (Duterte’s) indifference to people’s demands” and “displays extreme insensitivity to the sensibilities of thousands of victims, families and survivors of martial law barbarities.”

“He insults the memory of thousands of patriotic Filipinos from all walks of life who gave up their lives at the prime of their youth to fight for the dictatorship’s overthrow,” the CPP added.

The recent CPP stance is a reversal of the earlier position of its Utrecht-based founder, Jose Maria Sison, who said he had no problems with Marcos being buried in the heroes’ cemetery because those buried there were not all martyrs, anyway.  SFM