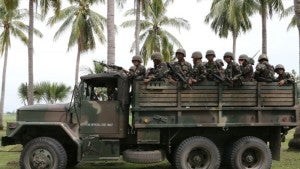 Four followers of Commander Madrox, including his brother, were killed in the six-hour fighting.

Senior Superintendent Emmanuel Peralta, chief of the Cotabato provincial police, said that a civilian, identified as Daib Malimbas, a resident of Nabalawag, was killed during the shootout.

Peralta said Masgal was believed to be distributing shabu in the borders of North Cotabato and Maguindanao.

“It is a joint operation and the targets were heavily armed,” Petinglay said.