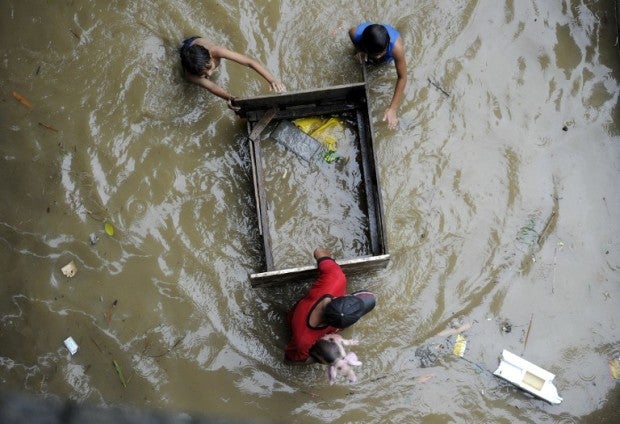 A man (bottom) carries a piglet to higher ground as he wades through a flooded street in San Mateo, Rizal province, east of Manila on August 13, 2016. Floods inundated major thoroughfares in the capital late on August 12, after heavy rains brought about by southwest moonson, authorities said on August 13. / AFP PHOTO / NOEL CELIS

Five people have been killed in the Philippines and tens of thousands have fled from floods caused by days of unrelenting rain, rescuers said Sunday.

Civil defense officials warned residents of Manila and nearby provinces to expect more heavy seasonal rain over the coming days as more than 24,000 people sought refuge in schools and government buildings.

“Those who are already in evacuation centers should stay there until the weather improves,” she added.

Those evacuated included nearly 9,000 Manila residents displaced by flooding from the Marikina River on Saturday.

The council said three Manila slum residents were crushed to death Saturday by walls that collapsed in the floods.

A man drowned crossing a swift-flowing river on the central island of Panay on Wednesday, it said, while the authorities retrieved a body from a Manila canal on Friday — the cause of death is under investigation.

A fisherman went missing at sea off the central island of Marinduque on Monday, while a man was injured by falling rocks at a highway east of Manila on Friday, it said.

In all, more than 70,000 people have had their houses swamped by floodwaters, the council said, but majority of residents have remained at home.

The western section of the Philippines has been swamped by heavy rain over the past week, forcing the cancellation of some domestic commercial flights and the suspension of classes./rga