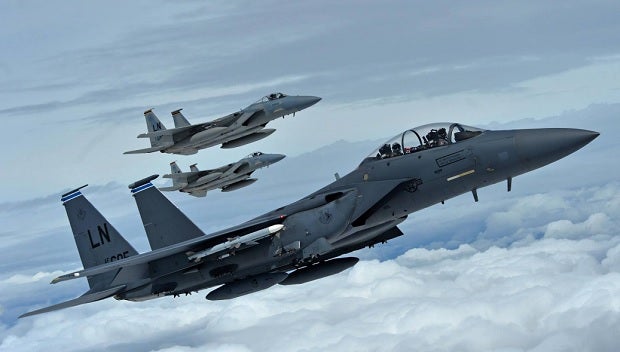 A formation of F-15C Eagles from the 493rd Fighter Squadron, and an F-15E Strike Eagle of the 492nd Fighter Squadron fly over England. The US Air Force said it had a shortage of 700 fighter pilots after many of its flyers had joined private commercial airlines. US AIR FORCE PHOTO / SENIOR AIRMAN ERIN TROWER

WASHINGTON, United States — The U.S. Air Force is struggling to fill a shortage of 700 fighter pilots by the end of the year, even as the U.S. battles in three air wars against the Islamic State of Iraq and Syria (ISIS) group in Iraq, Syria and Libya.

Air Force Secretary Deborah Lee James also told Pentagon reporters Wednesday that she is planning to pay drone pilots a $35,000 a year retention bonus to encourage them to stay in the service.

The 35,000 a year retention bonus would be an increase over $25,000 bonus the service has been allowed to provide. And all drone pilots would be eligible once their service contract is up. She added that Air Force needs the authority to increase bonuses for all pilots in order to address the shortage.

The Air Force has grappled with pilot retention for some time, particularly as airlines look to hire them, promising higher salaries and benefits. James said the pilot shortage could grow to 1,000 in a couple years.

“The airlines are forecast to be hiring a lot more,” she said, adding that the Air Force also needs to increase its training of new pilots.

She and Gen. David Goldfein, Air Force Chief of Staff, said they want to improve pilots’ quality of life and their military service conditions, including training and housing.

“It is a crisis,” said Goldfein. “Air superiority is not an American birthright, it’s actually something you have to fight for.”

He said fighter pilots are leaving at a higher rate, and that improving their quality of service as well as beefing up the retention bonus will help address the problem. Fueling that problem, he said, has been the persistent overseas deployments as the U.S. has been engaged in air wars for more than two decades.

“If we take a balanced approach, we’re hoping that we can get these folks to stay,” he said.

Goldfein said that so far the pilot shortage isn’t affecting air operations over Iraq, Syria and Libya. But the ongoing deployments continue to affect pilots’ decisions on whether to stay in the service.

ADVERTISEMENT
Read Next
Canada lawsuit says Pokemon players are invading privacy
EDITORS' PICK
UP-PGH wards for COVID-19 patients finished in 5 days
Cebu City closes its borders
IATF: Food firms to operate with 50% of workforce during Luzon quarantine
BREAKING: 1,075 people in PH has coronavirus disease – DOH
Style and music journeys with Claudia Barretto
DILG to stranded workers: ‘Stay where you are’ until Luzon-wide quarantine is over
MOST READ
Pacquiao to seek probe on leaked private letter from Barangay Dasmariñas
All 3 COVID-19 positive patients in Bicol sent home
Nurse who assisted patient ‘PH744’ in Nueva Vizcaya tests positive for COVID-19
No more bread? Company forced to limit production
Don't miss out on the latest news and information.