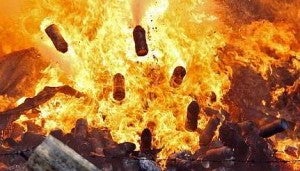 CEBU CITY — A school bus driver was hurt, two vehicles were destroyed while five others were damaged on Tuesday morning, when butane canisters inside an Isuzu truck exploded after the vehicle collided with a school bus in Barangay San Isidro, Talisay City, southern Cebu.

The truck driver, Edmar Luad, 21, and a resident of Naga City, was able to jump off the truck before the canisters exploded.

He was later arrested to face charges.

Luad was supposed to deliver the butane canisters to Jomar Gicali in nearby Minglanilla town.

Chief Insp. Randy Mendaros, Talisay City Fire Marshal, said  they received the fire alarm at 6:22 a. m. and firefighters were immediately dispatched to the area.

The fire was placed under control eight minutes later and was declared fire out at 6:50 a.m.

According to initial information provided by Mendaros, the truck with plate number ANA-3278 was transporting the butane canisters to Minglanilla when it hit the school bus of the Asian College of Technology (ACT).

After the collision, the truck hit a car display center where the butane canisters exploded.

The bus driver was hurt and was brought to the hospital.

Mendaros said the bus did not have any passenger at that time.

But the fire at the car display center destroyed the truck and another vehicle.

Four other vehicles inside the display center were damaged.

Only five cars were on display at that time.  SFM