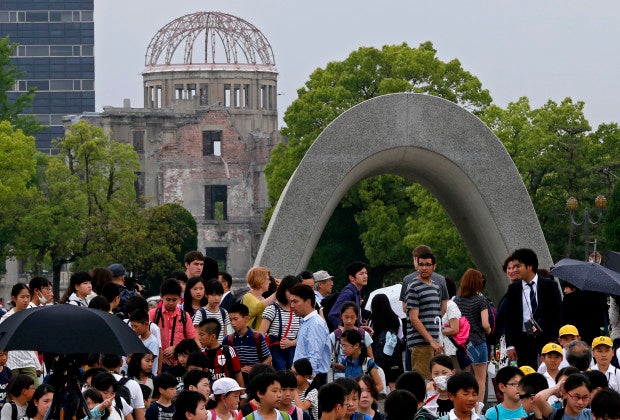 In this May 26, 2016 file photo, people visit the Hiroshima Peace Memorial Park in Hiroshima, Hiroshima Prefecture, southern Japan. In 1945, the US dropped an atomic bomb in the city then another in Nagasaki. On Tuesday, August 9, 2016, Nagasaki marked the 71st year since the destruction of the city that instantly killed 74,000. AP

TOKYO, Japan — The Japanese city of Nagasaki on Tuesday marked 71 years since its destruction by a US atomic bomb, with its mayor lauding a visit by US President Barack Obama to Hiroshima earlier this year.

A bell tolled as thousands of people, including ageing survivors and relatives of victims, observed a minute’s silence at 11:02 am (0202 GMT), the exact moment the of the blast.

Some 74,000 people died in the initial explosion, while thousands of others perished months or years later from radiation sickness.

The attack came three days after the US dropped the first ever atomic bomb on Hiroshima, which ultimately killed 140,000 people.

Nagasaki Mayor Tomihisa Taue lauded Obama’s landmark May visit to Hiroshima — the first ever by a sitting US president.

“Knowing the facts becomes the starting point for thinking about a future free of nuclear weapons,” Taue said, calling on other world leaders to visit his city.

Local officials and those who survived the bombing called for strict adherence to Japan’s post-war tradition of pacifism and were critical of the Japanese government.

“The government of Japan, while advocating nuclear weapons abolition, still relies on nuclear deterrence,” the mayor said, calling it a “contradictory state of affairs”.

Hiroshima mayor Kazumi Matsui on Saturday marked the commemoration of the bombing of his city, also citing Obama’s visit.

He said the visit was proof the US President shared his city’s view of the “absolute evil” of nuclear weapons.

“We must not allow a repeat of the horrible experiences of Hiroshima and Nagasaki that happened 71 years ago,” Abe said.

Abe has moved to extend the scope of Japan’s military and deepen the nation’s alliance with Washington in the face of threats from China’s expanding military strength and unpredictable North Korea.

North Korea last week test fired a ballistic missile that landed in waters off Japan’s coast for the first time.

Read Next
Japan FM protests to China over ships around disputed island
EDITORS' PICK
Experience clearer calls nationwide with Smart VoLTE
UP law prof Ryan Oliva missing; family cries for help
After weeks of delay, formal transition of power to Biden begins
Public warned against use of fake CopperMask
‘I believe I can win’: Hidilyn Diaz all eyes on Olympic gold
Working from home can be smooth and manageable if you master these tips
MOST READ
UP law prof Ryan Oliva missing; family cries for help
LPA may affect Mindanao by weekend; rain looms over eastern PH due to frontal system
Duterte can’t probe lawmakers? Lacson, De Lima see inconsistencies
Zia Dantes ‘kilig’ after receiving birthday greetings from idol Sarah G, YouTube stars
Don't miss out on the latest news and information.