Japan FM protests to China over ships around disputed island 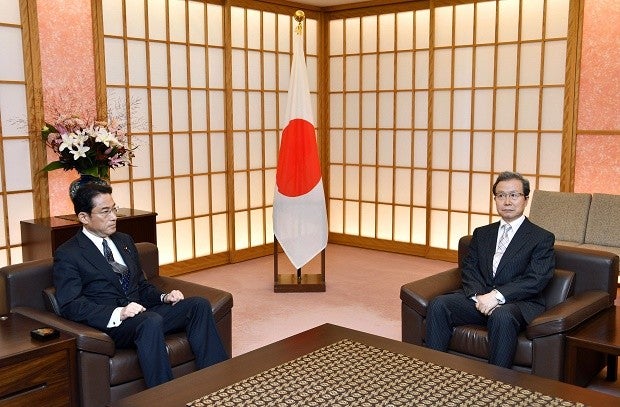 Japanese Foreign Minister Fumio Kishida, left, meets Chinese Ambassador to Japan Cheng Yonghua at foreign ministry in Tokyo Tuesday, Aug. 9, 2016. Kishida summoned China’s ambassador to his ministry, lodging a protest over the increased number of Chinese vessels getting in and out of the waters near the disputed islands in the East China Sea. AP

TOKYO — Japanese foreign minister has summoned China’s ambassador to lodge a protest over the increased number of Chinese vessels in waters near disputed islands in the East China Sea.

The move by Fumio Kishida on Tuesday comes as the number of Chinese coast guard ships around the islands has nearly quadrupled over the past few days.

China’s coast guard vessels routinely sail around the islands, usually two to four at a time. But since last weekend, the number surged to a fleet of 13, several of them armed, according to the Japanese coast guard.

Kishida told Chinese Ambassador Cheng Yonghua that the ships must leave the area, saying their presence has escalated tensions.