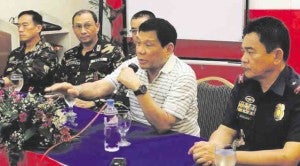 According the Major Joe Patrick Martinez, the 4ID spokesperson, President Duterte will be visiting the troops.

The 4ID commander, Major General Benjamin Madrigal, will also be presenting to the President some 25 firearms confiscated by the military from the New People’s Army (NPA) in various encounters in the Caraga and Northern Mindanao regions.

Mr. Duterte will also award Gold Cross Medals to nine soldiers for gallantry in action during an encounter with about 80 NPA members in Sitio Kambangon, Barangay Lilingayon, Valencia City, Bukidnon on August 5.

He will also pin Wounded Personnel Medals to two enlisted personnel who were wounded in action during a clash with the rebels on August 6 in the same area.  SFM