Alvarez: ‘Okay’ to separate voting for House, Senate in a con-ass 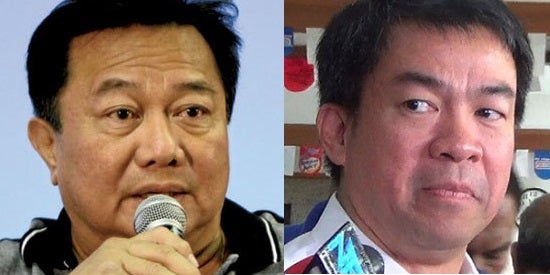 Speaker Pantaleon Alvarez (left) and Senate President Koko Pimentel are reportedly meeting eye-to-eye on the issue of the houses of Congress voting separately in a constitutional assembly. INQUIRER FILES

Leaders of Congress appear to be leaning toward amending the 1987 Constitution by constituent assembly (con-ass) voting separately.

In an interview after the meeting, Pimentel said the Senate interpretation of the constitutional provision on con-ass was for the House of Representatives and the Senate to vote separately — not as one body.

Alvarez said the House would be willing to adjust to the Senate’s interpretation if only for both chambers of Congress to agree on voting separately.

Asked if he would be willing to adjust to the Senate, Alvarez said: “Wala kaming problema.”

But both leaders of Congress said they have yet to make a final decision on whether or not Congress would vote separately.

“It’s more of parang fellowship lang between two Houses with the end in view of harmonious relationship to serve the people better,” Alvarez said.

Alvarez said he did not see the issue as a contentious one.

“That’s the least of our concerns,” Alvarez said.

Pimentel denied that there was a gridlock in Congress whether to vote jointly or separately.

“There’s no gridlock, because there was no agenda. This was just to thresh out our earlier agreement that we should meet formally or informally,” Pimentel said.

If there was an agreement, it was for Congress to meet more regularly, Pimentel said.

In a constituent assembly, changes to the Constitution would be done with a three-fourth vote of Congress. However, the Constitution is silent on whether or not the House of Representatives and the Senate vote jointly or separately.

President Rodrigo Duterte is urging his allies in Congress to change the Constitution for a shift from unitary to a federal form of government.

Read Next
Koko on drug list: No need for dead to report to superiors
EDITORS' PICK
Upgrade your protection vs COVID-19 with CopperMask’s CM-KF94
Another all-time high: PH records 39,004 new COVID-19 cases
Upsilon, Unilever give ‘real talk’ on climate change crisis
COVID-19 surge possibly slowing down in Cavite, Rizal, Bulacan; rising in other areas
SMDC’s Bloom Residences: A master planned community that cares for your health and wellness
COVID-19 daily growth rate in Metro Manila steadily declining — OCTA Research
MOST READ
Vico Sotto tests positive for COVID-19
Jade Bornea scores KO, moves closer to super flyweight title shot
Isko Moreno: Incentives should be given to those vaccinated, not the unvaxxed
Australian Open more important than any player: Nadal on Djokovic
Don't miss out on the latest news and information.