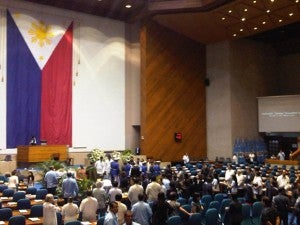 ILOILO CITY — An official of the Catholic Church in Iloilo is opposing a move led by President Duterte to amend the Constitution through a Constituent Assembly (Con-ass).

“A Con-ass is dangerous because this could be exploited by politicians for their personal and political agenda,” said Monsignor Meliton Oso, executive director of the Jaro Archdiocese Social Action Center.

Oso said amending the Constitution should be instituted through a Constitutional Convention (Con-con).

Delegates of a Con-con are chosen by voters while in Con-ass, members of congress convene to amend the Constitution.

“If delegates are chosen, we can be sure that they can focus their attention on the provisions that need to be changed. We also lessen the risk of self-serving amendments,” Oso told the Philippine Daily Inquirer.

The President, who is pushing for a shift to a parliamentary and federal form of government from the present presidential and bicameral system, favors a Con-ass to a Con-con because the latter is more expensive to hold.

But Oso said the cost of holding a Con-con “should not be a hindrance.”

He said spending more for a Con-con would be acceptable rather than face the risk of holding a Con-con.

The Catholic and other religious groups and militant organizations have in the past opposed moves to amend the Constitution amid moves to extend the terms of office of officials and to remove provisions limiting foreign ownership of key industries.  SFM