‘Bronze casket for Marcos a symbol of plunder’ | Inquirer News

‘Bronze casket for Marcos a symbol of plunder’ 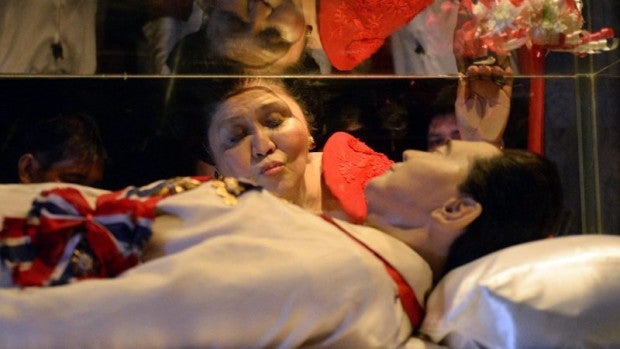 A militant group on Tuesday slammed the decision of the family of former President Ferdinand Marcos to hold the remains of the late strongman in a bronze casket imported from the US, describing it as an insult to Filipinos.

Bagong Alyansang Makabayan (Bayan) said that the bronze casket, which arrived in Batac City on Monday, is a “reminder of the Marcos regime of plunder and abuse.”

READ: US casket for Marcos?

“The wealth illegally amassed by the Marcoses will be used to ‘honor’ the late dictator in the same way it is used to whitewash his sins,” said Bayan Secretary General Renato Reyes Jr.

Reyes said that the “ostentatious” display of the wealth of the Marcoses and the state honors that will be accorded to the late President are “doubly insulting” to the families of the victims of the Marcos regime.

“We should pause to remember many of the activists during the dictatorship who were, abducted, murdered, and buried in unmarked graves, the desaparecidos. Contrast that with the supposed events on Sept. 18 and you have nothing but outrage,” he said.

Bayan has voiced out its opposition against President Rodrigo Duterte’s decision to give the green light for the burial of Marcos at the heroes’ cemetery, adding that not a single centavo from the government coffers should be used to honor the late President.

READ: ‘Not a single centavo of public funds to bury plunderer’ — Bayan

Malacañang last Sunday released a memorandum from Defense Secretary Delfin Lorenzana instructing Armed Forces of the Philippines (AFP) Chief of Staff Ricardo Visaya to “undertake the necessary planning and preparations to facilitate the coordination of all agencies concerned.”

Reports say the former President will be buried at the Libingan ng Mga Bayani on September 18.

The remains of the late President have been kept in a glass coffin in his mausoleum for the past 23 years. RAM/rga