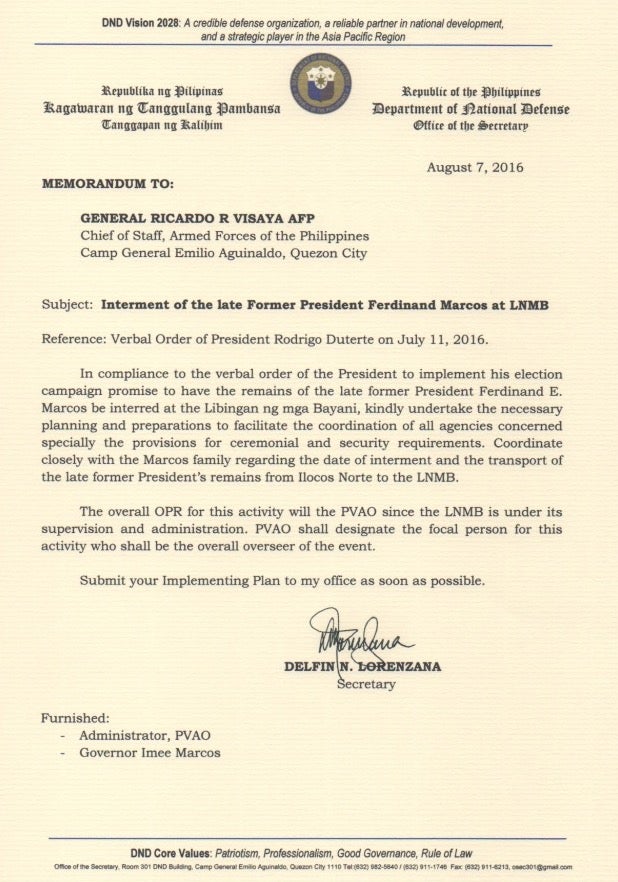 Malacañang has released to media a copy of the memorandum ordering the burial of former President Ferdinand Marcos at the Libingan ng mga Bayani in Fort Bonifacio, Taguig City.

The Media Accreditation and Relations Office (Maro) on Sunday evening e-mailed a copy of the memorandum referencing the “Verbal Order of President Rodrigo Duterte on July 11, 2016.”

READ: Duterte: Marcos deserves to be buried at heroes’ cemetery

“Preparation for the interment of former President Ferdinand Marcos at the Libingan ng Mga Bayani is now underway,” Maro said in the message.

“The Philippine Veterans Affairs Office (PVAO), the government office that supervises and administers the Libingan, has been designated as the office of primary responsibility for the planning and preparations for this activity, including close coordination with the Marcos family,” it added.

The memo, signed by Defense Secretary Delfin Lorenzana was addressed to Armed Forces of the Philippines Chief of Staff, General Ricardo Visaya.

“Kindly undertake the necessary planning and preparations to facilitate the coordination of all agencies concerned specially the provisions for ceremonial and security requirements,” Lorenzana said in the letter also sent to PVAO and Governor Imee Marcos.

“Coordinate closely with the Marcos family regarding the date of interment and the transport of the late former President’s remains from Ilocos Norte to the LNMB,” he said.

Reports said Marcos’ remains will be buried on September 18.

The interment of Marcos at the Libingan ng mga Bayani has long been a controversial issue, with anti-martial law and human rights groups blocking the proposal.

Marcos, who declared martial law over the country to remain in power for 20 years, has been called a fraud by some historians and groups claiming that his own account of his heroism during World War II were false. KS

READ: The Great Liar: How Marcos fabricated his war record