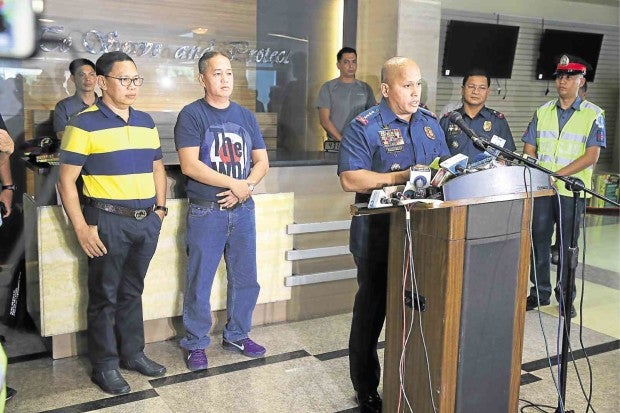 “That’s my order,” Mr. Duterte told reporters after visiting Chief Insp. Ricky Boy Remoroza, who was wounded in a gunfight with a suspected drug dealer in Magsaysay, Davao del Sur province, on Wednesday.

Asked if security forces could shoot narcopoliticos only if their lives were in danger, Mr. Duterte replied, “Read my lips.”

The President said politicians could try breaking other laws, but not drug laws.

“You will surely die,” he said.

Mr. Duterte is expected to release soon a list of at least 27 local politicians involved in the drug trade.

Earlier, presidential legal counsel Salvador Panelo said the list was “shocking” and Mr. Duterte knew some of the people on it.

“The President said he knew some of them, but he had a duty to serve and protect the people,” Panelo said.

Two of the officials on the list had met with Mr. Duterte and wept in front of him.

“The two offered to resign,” the President said earlier.

On Tuesday, Mayor Rolando Espinosa Sr. of Albuera, Leyte province, turned himself in to the police to beat a 24-hour deadline that Mr. Duterte had given him and his son, Kerwin Espinosa, to surrender or be shot on sight for dealing in drugs.

Espinosa denied he was a drug dealer, but confirmed that his son was and called on him to surrender.

Kerwin has not surrendered, though. There are reports that he has slipped out of the country.

Three more local officials surrendered to the police on Friday.

Mayor Mamaulan Abinal Mulok of Maguing, Lanao del Sur, and former Mayor Mohammad Ali Abu Abinal of Marantao, in the same province, husband of the current town mayor, turned themselves in for investigation.

Director General Ronald dela Rosa, chief of the Philippine National Police, told reporters that Mulok and Abinal might have received information that they were on Mr. Duterte’s list of local politicians involved in the narcotics trade.

Dela Rosa said Mulok and Abinal were “downlines,” or dealers who got their drug supplies from “shabu queen” Johaira “Marimar” Macabuat, a former mayor of Maguing who was arrested in Cagayan de Oro City recently.

Mulok and Abinal admitted trading “shabu,” or methamphetamine hydrochloride, saying they distributed supplies in Manila and Caloocan in Metro Manila and in Cavite province.

The third local official who surrendered on Friday for investigation was Mayor Rasul Sangki of Ampatuan, Maguindanao province. He refused to face reporters.

“We expect more to come to change their ways,” Dela Rosa said. “Those politicians involved in drugs still have a chance to change.”

Another local official from Lanao del Sur is expected to turn himself in on Monday.

On Friday, Mr. Duterte told reporters here that the shooting of Remoroza proved his argument that drug-crazed people would put up a fight when being arrested.

That is the reason, he said, that he has ordered security forces to shoot and kill suspects.

He reiterated his promise of protection for security forces who would kill drug suspects.

“For as long as it is done in the performance of duty of soldiers and police, I’ll answer for it. That is my official and personal guarantee,” he said.

“I will answer for the deed. If policemen are involved in encounters [with drug suspects], don’t investigate it,” he added.

Answering criticisms that drug suspects are being summarily executed, Mr. Duterte cited the shooting of Remoroza.

“Here is an example of a police officer wounded in the performance of his duty and then they will say the suspect was salvaged?” the President said, using a local term for summary execution.

Mr. Duterte repeated his assurance of protection for soldiers and policemen who would kill drug suspects during a visit to troops at Camp Peralta in Jamindan, Capiz province, on Friday.

The President said he cared nothing about the criticism from human rights groups.

“I told them I had a problem to solve, I must first solve the problems of the country,” he said.

Mr. Duterte said he was not afraid of imprisonment, as he was already 71 years old.

He explained that under the Revised Penal Code, inmates can be released when they turn 70.

Besides, he added, he has immunity as President.

Mr. Duterte’s centerpiece anticrime drive, focused on an ambitious campaign promise to end the widespread drug problem in six months, has left 660 drug suspects dead, according to monitoring by the Inquirer.

Of the total, 436 were killed in police operations and 224 were executed by suspected vigilantes or unidentified assailants.

In July alone, 596 people were killed, 196 by unknown assailants or by vigilantes.

Police were involved in the killing of 400 suspects during the first month of the Duterte administration.

Twenty-three were killed on just one day—July 9.

In the first four days of August, 64 drug suspects were killed, 34 involving the police and 30 involving unknown assailants.

The killings have alarmed international human rights groups and even news organizations.

On Wednesday, the United Nations Office on Drugs and Crime (UNODC) urged an immediate halt to the extrajudicial killings, which it described as “a breach of fundamental rights and freedoms.”

In a speech in Davao City late on Thursday, Mr. Duterte acknowledged abuses in the drug war, but refused to back down from his shoot-to-kill order for drug suspects.

The President said most drug suspects slain in gun battles with police had put up a fight, but added that he was sure some were “salvaged.”

In the case of illegal killings, Mr. Duterte said the government would investigate.

Adequate safeguards exist in the Philippines’ legal system, including requirements for court warrants for arrests, to protect the public and ensure law enforcers are not given “unbridled discretion” that can lead to abuses, Diokno said.

The Commission on Human Rights could seek to stop the anticrime drive through a court petition, said Diokno, who heads the Free Legal Assistance Group, a private organization that provides legal help to the poor.

Sen. Panfilo Lacson, a former PNP chief, said on Wednesday that there was “no such thing” as shoot-to-kill or shoot-on-sight order, and even Dela Rosa knew it.

“If they do that, then that would clearly be murder,” said Lacson, head of the Senate committee on public order and dangerous drugs.

“Shoot on sight means just because you suspect someone or the President declared someone is a drug lord and you will kill him… That’s a violation of law,” he said.

Lacson said police could only justifiably shoot suspects in “self-defense or in defense of a stranger or another person.”

Malacañang said on Friday that the President’s shoot-to-kill order against narcopoliticos would apply only to those who would resist arrest.

“The President’s statement on narcopoliticians is congruent with government policy on maintaining and protecting peace and order in the nation,” presidential spokesperson Ernesto Abella said.

He said the administration was serious about eliminating the drug menace.

“[The President] has given due and ample notice that the clear and present danger of drugs engulfing the nation will be addressed and law enforcers will neutralize those who resist or endanger the lives of arresting officers,” Abella said. With reports from Leila B. Salaverria, Jaymee T. Gamil and AP/TVJ