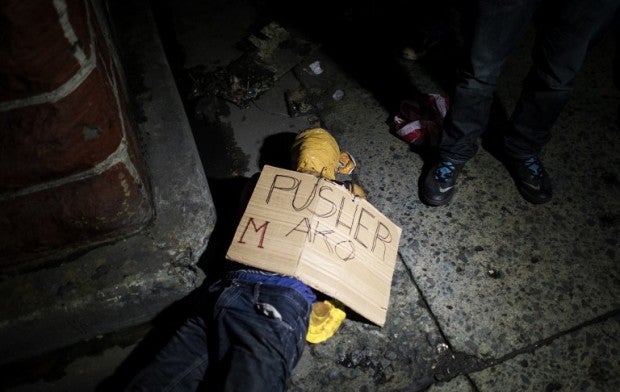 In this picture taken on July 8, police officers investigate the dead body of an alleged drug dealer, his face covered with packing tape and a placard reading “I’m a pusher,” on a street in Manila. President Rodrigo Duterte on July 1 urged communist rebels to start killing drug traffickers, adding another layer to a controversial war on crime in which he has warned thousands will die. AFP

President Rodrigo Duterte has acknowledged abuses in the battle against illegal drugs, which has left more than 400 suspects dead and alarmed rights activists, but is not backing down from a shoot-to-kill order for drug suspects.

The President said in a speech late Thursday that most drug dealers and addicts slain in gunbattles with police had put up a fight, but added that he was sure some were “salvaged,” a local term for extrajudicial killings usually by law enforcers.

In the case of illegal killings, Duterte said the government will investigate.

Early Friday, he said he gave “shoot-to-kill” orders against drug dealers including politicians involved in the illicit trade.

A legal expert, Jose Manuel Diokno, says such an order is, at the least, legally questionable.