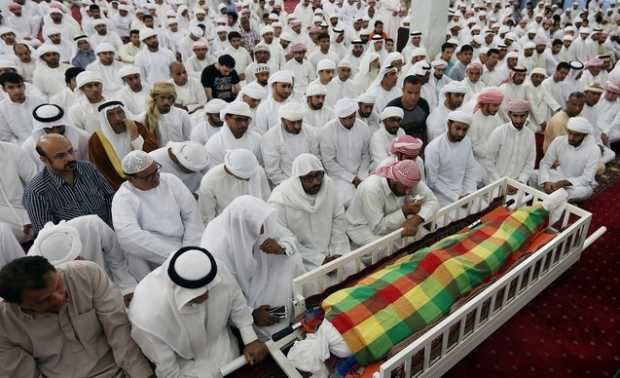 “My eldest son died a hero while saving the lives of the plane passengers. He is a martyr, and he will be missed greatly.”

These were the words of Issa Al Balushi to describe his deceased son, Jassim Isa Al Balushi, who died after battling the flames engulfing Emirates flight EK521 during a crash on Wednesday.

Hundreds of people flocked to the Sheikh Rashid Mosque in the fallen firefighter’s hometown of Kharan in Ras al-Khaimah city (RAK) to pay their last respects.

Among those at the funeral was the the Crown Prince of RAK, Sheikh Mohammed bin Saud Al Qasimi,  who led the prayers inside the Al Salehyia cemetery.

“Al Balushi was a role model of courage and sacrifice for the homeland, duty to save other people’s lives, and safeguard the security and safety of the country,” Al Qasimi was quoted as saying in a report in the UAE-based media site of The National.

The Crown Prince of Ras al-Kkaimah also expressed his heartfelt condolences to the family of the martyr. He also prayed to Allah Almighty to rest him in Paradise and grant solace and patience to his family.

The 27-year-old firefighter is remembered by his brothers Harib, 16 and Salman, 22, for his good deeds, high energy and love for volunteering for his community.

“He was a role model and a hero. He loved his country and loved his work,” said Harib, who could not contain his tears as he saw the body of his older brother laid to rest.

Salman, for his part, said his brother’s heroism influenced him to join the Dubai Police Force.

“Everyone in RAK knows the heroism of my brother. He had saved many lives. If you check Snapchat, you will find officials saying brave things that my brother did,” he told The National.

Local law enforcement officials, including members of the General Civil Aviation Authority (GCAA), also went out of their way to pay their respects.

“It’s a great honour to die in the line of duty,” retired police officer Hussein Mohamed Ali, who came from Dubai, said. “I hope his family find solace that their son was a hero and is now in heaven.”

Delegations from Sharjah and Ras Al Khaimah also paid their respects to the family of the firefighter.  Khristian Ibarrola

Emirates airliner with 300 onboard crash lands in Dubai