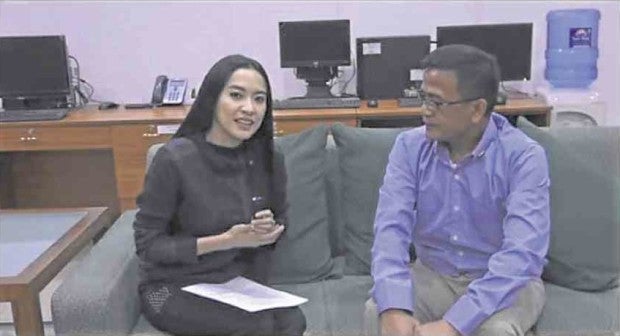 JUST KIDDING, HE SAYS Singer-dancer Mocha Uson interviews Customs chief Nicanor Faeldon (right) for her blog, after which he appointed her social media consultant for Customs—“just a joke,” he says later, after netizens scored the appointment. SCREENGRAB FROM FACEBOOK

Customs Commissioner Nicanor Faeldon started a joke, but netizens were not amused.

In fact, the Bureau of Customs (BOC) on Thursday had to issue an official denial on its Twitter account after viral posts scored Faeldon for supposedly naming singer-dancer Mocha Uson as the bureau’s social media consultant.

“Commissioner Nicanor Faeldon will not appoint Mocha Uson as BOC Social Media Consultant but she can write articles about BOC on her blog,” the tweet said.

Faeldon’s alleged appointment of the sexy lead singer of Mocha Girls sent netizens into a frenzy as they flooded social networking sites with questions about Uson’s qualifications for the job aside from her being a staunch supporter of President Duterte.

Some netizens, however, backed Uson and asked the public to give the singer a chance to prove her worth.

Rumors about the singer’s appointment to the BOC started after Uson published on Wednesday her exclusive interview with Faeldon on her “Mocha Uson Blog,” her Facebook page that has nearly four million followers.

According to Faeldon’s chief of staff, Mandy Anderson, the BOC chief mentioned Uson’s appointment as  social media consultant in response to a reporter’s question.

“But (Faeldon) had said it in jest,” Anderson said of Uson’s appointment. “The commissioner took it back, saying he was just kidding, but the report on the  ‘appointment’ had already been posted online.”

He added:  “No papers are being prepared. Commissioner Faeldon did not sign any paper regarding Mocha’s appointment.”

As for reports that Uson was being considered to head the BOC’s Public Information and Assistance Division, Anderson said the post had already been filled, with the appointee assuming office in mid-August.

Uson, the chief of staff added,  “can write about the BOC (in her blog) but she’s not officially a consultant.”

It’s all about “freedom of speech, that’s it,” Anderson said.

In her blog, Uson said she sought an interview with Faeldon after receiving complaints from overseas Filipino workers on the “high taxes” imposed on balikbayan boxes.

She also posted about Faeldon’s campaign against corruption in the graft-ridden agency.

Uson, the founder and lead vocalist of the skimpily clad singing and dancing group, Mocha Girls, campaigned vigorously for Duterte during the May elections, and calls fellow supporters “Ka-DDS” or “Duterte Die-hard Supporters.”