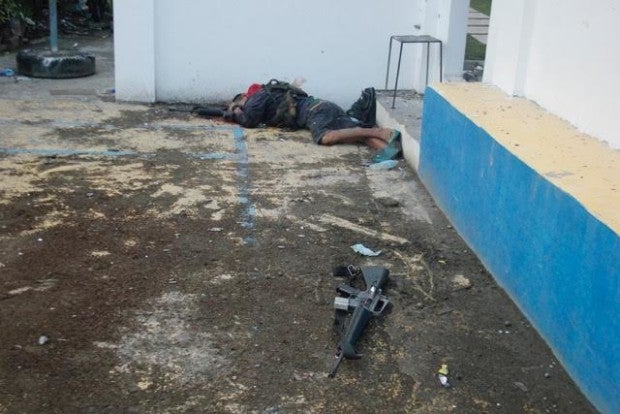 Police reported on Wednesday, August 3, 2016, that six alleged henchmen of Mayor Rolando Espinosa Sr. were killed in a clash at the official’s house in Albuera, Leyte. Photo by ROBERT DEJON/INQUIRER VISAYAS

After six of Mayor Rolando Espinosa Sr.’s hired men died in a police operation early Wednesday morning, the Albuera, Leyte mayor is expected to report to the Criminal Investigation and Detection Group (CIDG) this afternoon.

The mayor has not showed up as of press time.

Carlos said the police will track him down if he will not show up within the day.

Espinosa promised to PNP chief Director General Ronald “Bato” de la Rosa he would cooperate with the police during a press conference on Tuesday.

His son Kerwin, who is also alleged involved in drug trafficking, is still in hiding.

At about 4:30 a.m., six individuals died in a shootout with the police at a compound which the Espinosa family owns in Sitio Tinago, Barangay Binulho.

READ: 6 dead in anti-drug raid of Espinosa house in Leyte

Carlos said policemen were patrolling near the compound when Espinosa’s men opened fire at the cops.

Police recovered at least 13 high-powered firearms inside the compound. Authorities said there were 50 to 100 armed men inside the residence.

But Carlos said, based on the data from the PNP’s Firearms and Explosives Office, Espinosa owns three licensed firearms only–one shotgun and two Glock pistols, 9 millimeter while the other .40 caliber.

The police official said two pistols of Espinosa were considered illegally-owned after the license for both guns expired May this year.

Carlos said the PNP is still confirming if the armed men were hired as Espinosa’s private army group. JE