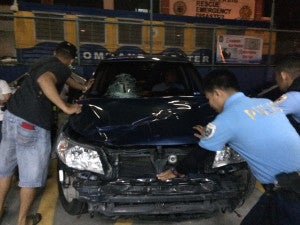 Pasig City police recover on Aug. 2, 2016, the Subaru Forester SUV of Baldwin Cham Velasco who killed a call center agent and injured his three co-workers in a hit-and-run on July 31, 2016.

The Pasig police have identified the driver of the sports utility vehicle (SUV) that hit and killed a 23-year-old call center agent and injured his three co-workers in Pasig City, early Sunday.

PO3 Edwin Cruz identified the driver as Baldwin Cham Velasco, about 30-33 years old and reportedly in the security agency business.

Velasco is now being sought for the death of the call center agent and serious injuries to three persons, including a pregnant woman who suffered a miscarriage.

Senior Superintendent Orlando Yebra, Jr., the Pasig police chief, said a concerned citizen who witnessed the event gave them possible plate numbers, which were later verified by the police.

The police recovered the Subaru Forester parked in the house of Velasco in New Manila, Quezon City, on Tuesday afternoon, Cruz said.

The vehicle, which suffered damage and had blood stains, has been brought to the Pasig City Police headquarters.

Cruz said hair  samples found on the vehicle would be examined to determine if these belonged to any of the victims.

The investigator said they had contacted Velasco by phone and he promised to turn himself in.

“He knew he hit something, but got scared,” Cruz told reporters Tuesday evening.

Killed in the incident were Jake Sentillas, of Taguig City, and the unborn child of Marinel Ravina of Masambong, Quezon City. Rabina was in critical condition at the Medical City in Pasig, on Tuesday night.

Two other injured victims were Juan Carlo Villanueva of Taguig and Micah Uy of Pulilan, Bulacan.

Cruz said Sentillas was dragged by the vehicle for about 300 meters before he fell off near St. Francis Square in Barangay WackWack.

The WackWack Rescue team rushed Sentillas to the Mandaluyong Medical City where he was declared dead on arrival.

A closed circuit camera along Julia Vargas captured the SUV coming from the east and heading west towards SM Mega Mall, but did not catch its plate number.  SFM