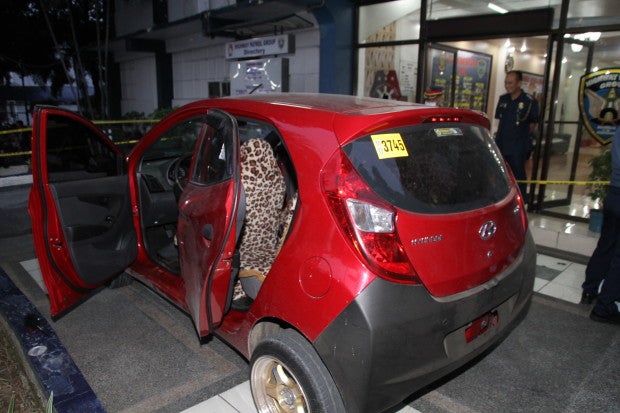 (Updated) The vehicle used by an Army reservist suspected in the shooting and death of a bicycle rider after engaging him in a fistfight in Quiapo, Manila was found in Nueva Vizcaya, police said.

In a report by the Nueva Vizcaya police, Senior Superintendent Leumar Abugan said the red Hyundai Eon with conduction sticker number MO 3745 used by Vhon Tanto was recovered at Purok 3, Barangay (village) Kirang in the municipality of Aritao, after conducting a manhunt operation at around 5 a.m.

Abugan said that Tanto left the vehicle at the house of his brother in law Jonathan Leaño.

According to the report, Leaño said Tanto told him that he would go to Bataan on Wednesday at around 8 a.m., and asked him to be transported to Florida bus stop at Banganan where the suspect boarded a Florida bus going to Sampaloc-Cubao via Subic-Clark-Tarlac Expressway.

Abugan said the car was brought to the Aritao police station for initial inspection before being turned over to the Highway Patrol Group’s national headquarters in Camp Crame, Quezon City.

The Manila Police District identified the 39-year-old Tanto as the driver of the Hyundai Eon who killed Mark Vincent Garalde on Monday night after the latter nearly hit his car. CCTV footage of the incident showed two men in a scuffle with the car driver chasing and later firing multiple gunshots at the bicycle rider.

The Army on Wednesday confirmed that Tanto is a reservist with a rank of a Private who is assigned with the 1301st Community Defense Center, NCR Regional Community Defense Group of the Army Reserve Command based in Caloocan. With reports from Julliane Love de Jesus/IDL/rga

Read Next
Drug pushing suspect killed, 4 nabbed in Parañaque
EDITORS' PICK
Kai Sotto continues to inspire Filipinos by sharing his passions and stories with Smart Prepaid
1Sambayan to nominees: Stick to word of honor
Alex Eala wins Grand Slam on Independence Day: ‘I hope I made my contribution to the country’
Ahead of ONE: Full Blast II, Mongkolpetch warns Elias Mahmoudi: ‘Watch out for my fists’
Trust Robredo’s political instincts – Kaya Natin! convener
EDITORIAL: Good news, bad news
MOST READ
1Sambayan to nominees: Stick to word of honor
China cautions G7: ‘small’ groups don’t rule the world
Leni vs. Sara
PH to have cloudy, rainy Monday — Pagasa
Don't miss out on the latest news and information.