War on drugs: Coast Guard to inspect vessels at sea 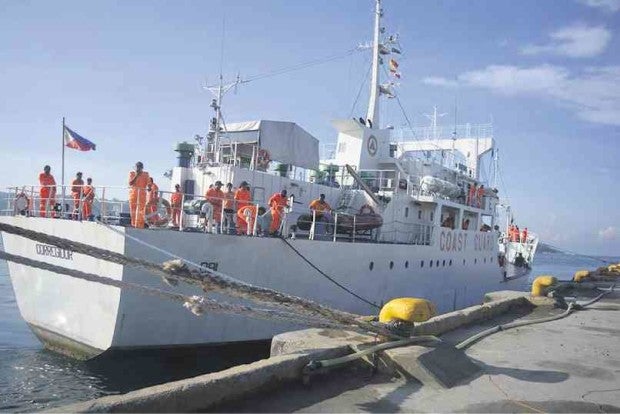 OFFICERS and men of the Philippine Coast Guard in Southeastern Mindanao prepare to go on patrol in the Davao Gulf to help in the war on drugs. PHOTO FROM PCG FACEBOOK PAGE

DAVAO CITY—Authorities are taking the war on drugs to the high seas.

A ranking Philippine Coast Guard (PCG) officer said Coast Guard vessels would start inspecting all local and international vessels in waters off the provinces of Davao, Agusan and Sarangani, and the city of General Santos in line with the antidrug campaign of the Duterte administration.

Dela Cruz said at least 70 foreign fishing boats berth in different ports in Southeastern Mindanao per day with some of these vessels coming from China and Vietnam.

He said the decision to conduct sea inspections came after the discovery of a floating “shabu” lab in Subic Bay in Zambales province and the recent confiscation of about 100 kilograms of shabu last month in Cagayan province.

The smuggling of drugs through vessels at sea has been detected in the past.

In March 2014, authorities discovered and seized over 60 cocaine bars inside a shipping container at the Tibungco district in this city.

Then mayor Rodrigo Duterte said the discovery of the cocaine bars indicated that the country has become the new transshipment point of drugs from neighboring countries in Asia.

“From all indications, it seems that the Philippines has become a transshipment point for drugs,” Duterte said a few days after the cocaine discovery.

The contraband was discovered by workers of banana firm Sumifru, who inspected the container just as they were about to load it with bananas.

A cocaine bar could sell for as much as P6 million in the drug market.

In 2009, 16 kilograms of cocaine were also discovered in a refrigerated container at the Maersk container yard here. The discovery led to the filing of charges against six employees of the shipping company.

Dela Cruz said the PCG Davao district is also awaiting the arrival of two more patrol vessels that would help in the inspection of boats and ships at sea.