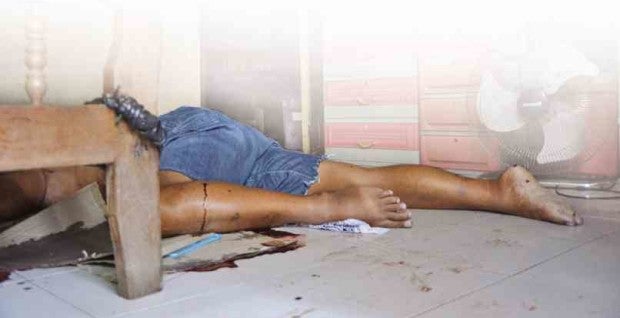 FORMER police officer Vincent Moulic, who was suspected of involvement in drugs, lies dead inside his house in the village of Pantal, Dagupan City, after he was shot during a police raid. RAY B. ZAMBRANO/INQUIRER NORTHERN LUZON

LINGAYEN, Pangasinan—One is a graduating Mass Communication student. The other is about to finish a seaman’s course.

But the killings of Rowena Tiamson, 22, and Roman Clifford Manaois, 20, bore the signs of a brutal war on drugs gone astray.

Rowena was found dead on July 19 on a village road in Manaoag town. She was tied and her face wrapped in packaging tape. Strung around her neck was a piece of cardboard with the written words: “Don’t emulate, she is a pusher.”

Shot in the head

On the same day Rowena was found, Roman was riding a tricycle with a friend to the public market of Dagupan City for a meal. Along the way, Roman’s friend who was driving the tricycle picked up a man, Zaldy Abalos. As Abalos alighted in the village of Lucao, gunmen came and opened fire apparently targeting Abalos but also hitting Roman.

According to a Facebook post of Roman’s grandfather, Melandrew Velasco, the gunmen made sure Roman was dead. His grandson, Velasco said, was shot in the right temple.

Found on Roman’s body is a white bond paper with the written words: “Don’t emulate me. I am a pusher. I am a killer and you’re next—DDS.” It was not clear what the initials DDS meant but they were the same initials used for the Davao Death Squad, a vigilante group which has been blamed for a spate of extrajudicial killings of crime suspects in Davao City.

Rowena’s killing shocked and enraged friends and relatives, who swore that she was neither a drug pusher nor a user.

In their Facebook posts, Rowena’s friends remembered her as a good singer, an honor student and an active church choir member, all indications that drugs were not part of her life.

Roman’s grandfather, Velasco, said in his post that Roman’s killing is a tragic event for the family.

“How come innocent men like Oman (Roman’s nickname) are being summarily executed?” Velasco said in his post.

Velasco said Roman’s grandmother, Leoning, cried and “was asking me why President Duterte is allowing the killing of innocent persons.”

“I was lost for words to answer Ate Leoning’s question,” Velasco wrote in his post.

Results of an autopsy on Roman’s remains showed he has not been using drugs, Velasco said.

Police are now investigating the killings of the two students, according to Supt. Jackie Candelario, deputy provincial police chief of Pangasinan.

The war on drugs continues in the province.

As of Wednesday, 8,055 users and pushers from 44 towns and four cities have surrendered to authorities, Candelario said, while 45 drug suspects have been killed, 15 of them shot by policemen during antidrug operations.

In Bulacan, 90 drug suspects have been killed, while a municipal police chief was relieved, since Mr. Duterte assumed office.

Senior Supt. Romeo Caramat Jr., acting Bulacan police director, said 73 of the dead were killed in gunfights with police while 17 were apparent victims of vigilantes.

On July 20, Supt. Ganaban Ali, chief of police of San Ildefonso town, was relieved of duty, and was transferred to a new post in Mindanao with 10 other Bulacan policemen. They are under investigation for alleged involvement in drugs.

One of the transferred policemen was PO3 Rogelio Sta. Ana, who surrendered on July 11 and confessed to having sold drugs. He had been charged on July 22 with grave misconduct. Gabriel Cardinoza, Inquirer Northern Luzon, and Carmela Reyes-Estrope, Inquirer Central Luzon