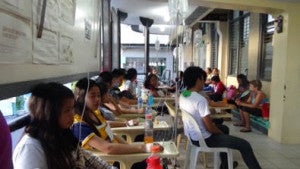 At least 38 students and an adviser of the San Roque National High School in Albur town, Bohol province, were brought to Gov. Celestino Gallares Memorial Hospital in Tagbilaran City after experiencing symptoms of food poisoning on Wednesday, July 27, 2016. (CONTRIBUTED PHOTO)

TAGBILARAN CITY, Bohol —  At least 38 students and a class adviser of a senior high school in  Albur town, Bohol province, fell ill of food poisoning on Wednesday, which was believed to have been caused by food bought by the school.

The patients – all Grade 11 students of the San Roque National High School in East Poblacion — complained of dizziness, stomach pain and headache, and showed symptoms of diarrhea.

At about 10 a.m. on Wednesday,  more  students were  brought to the Gov. Celestino Gallares Memorial Hospital (GCGMH)  in Tagbilaran City.

Hospital personnel confirmed that the students were ill of food poisoning.

“They had a boodle fight during our acquaintance party,” said Fuerzas.

Kristine Joy Dumadan, 16, said that she had a severe headache and stomach pain by Wednesday morning.

She said she did not notice anything wrong with the food except for the rice, which was undercooked.  SFM