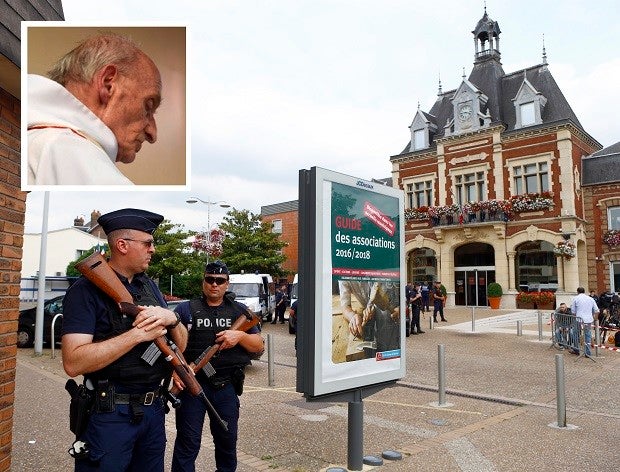 French police officers stand guard in front of the Saint-Etienne-du-Rouvray’s city hall, Normandy, France, after an attack on a church that left Catholic priest Jacques Hamel (inset) dead, Tuesday, July 26, 2016. Two attackers invaded a church Tuesday during morning Mass near the Normandy city of Rouen, killing the 84-year-old priest by slitting his throat. They took several hostages before being shot and killed by police, French officials said. AP

SAINT-ETIENNE-DU-ROUVRAY, France — A French jihadist who was under house arrest on terror charges took part in a church attack in which a priest was killed Tuesday, further inflaming tensions over security failures in the violence-weary nation.

Adel Kermiche, 19, was one of two attackers who stormed a Catholic church in the northern town of Saint-Etienne-du-Rouvray during morning mass, slitting the throat of an 86-year-old priest, Jacques Hamel, and leaving a worshipper with serious injuries, said Paris prosecutor Francois Molins.

The attack, claimed by the Islamic State of Iraq and Syria (ISIS) group, comes with France still in mourning less than two weeks after Tunisian Mohamed Lahouaiej Bouhlel ploughed a truck into a crowd in the Riviera city of Nice, killing 84 people and injuring over 300.

The carnage, the third major strike on France in 18 months, prompted a bitter political spat over alleged security failings and revelations over the church attack were likely to raise further questions.

Molins said that Kermiche first came to the attention of anti-terror officials when a member of his family alerted him as missing in March 2015. He was arrested by German officials and found to be using his brother’s identity in a bid to reach Syria.

He was charged and released under judicial supervision, but in May fled to Turkey where he was again arrested and returned to France where he was held in custody until March 2016.

Kermiche was released and fitted with an electronic bracelet which allowed him to leave his house on weekdays between 8:00 am and 12:30 pm, said Molins.

It was during this time that he and another attacker entered the centuries-old stone Saint-Etienne church, taking hostage the priest, Hamel, three nuns and two worshippers.

One of the nuns managed to escape and call police, who, upon arrival, tried to negotiate with the hostage-takers.

The nun, Sister Danielle, told local radio RMC that Hamel was wearing his white vestments and was at the foot of the altar when “they forced him to get on his knees and not move”.

“He tried to struggle, he tried,” she said, adding the men were speaking Arabic and shouting and had “recorded” the attack.

Molins said police were unable to launch an assault on the church as three hostages were lined up in front of the door.

Two nuns and one worshipper then exited the church followed by the two attackers, one carrying a handgun, who charged at police shouting “Allahu akbar” (God is greatest).

One of the attackers was carrying a “fake explosive device covered in aluminium foil” and three knives. The other was holding in his hand a kitchen timer covered in foil, and carrying a backpack containing a similar fake bomb.

“The two were neutralized” and killed by police, said Molins.

The prosecutor said that a 17-year-old born in Algeria had been taken into custody. He is the younger brother of a suspect “wanted under an international arrest warrant for having left to the Iraq-Syria zone”.

Grey clouds hung over the town, near-deserted as stores shut down after the attack.

“I thought it would only be in big cities, that it couldn’t reach here,” she said.

Mohammed Karabila, who heads the regional council of Muslim worship for Haute Normandie, said he was “stunned by the death of my friend (Hamel). He was someone who gave his life to others. We are dumbfounded at the mosque.”

Karabila added: “How could a person wearing an electronic bracelet carry out an attack. Where are the police?”

Pope Francis voiced his “pain and horror” at the “barbaric killing” of the priest, while European Commission chief Jean-Claude Juncker pledged the bloc’s “solidarity and cooperation”.

Valls had warned earlier this week that France will face more attacks as it struggles to deal with extremists returning from jihad in Iraq and Syria and those radicalised at home.

France has been a prime target of ISIS, which regularly calls for supporters to launch attacks against the country, a member of the international coalition carrying out air strikes against the jihadist group in Iraq and Syria.

The ISIS-linked Amaq news agency said the perpetrators were “soldiers of the Islamic State who carried out the attack in response to calls to target countries of the Crusader coalition”.

It was the fourth attack claimed by ISIS in Europe in two weeks, carried out by a mixed bag of assailants more or less inspired by the group from afar, some of whom are reported to have suffered mental illness.

“Strike at any moment, in any place, and any circumstance: such is the criminal and fanatic propaganda of the terrorist organisation Daesh which terrifyingly permeates the minds of people of varied profiles,” said Molins.

“It should not be possible for someone awaiting trial on charges of having links to terrorism to be released” on house arrest, said Federic Lagache, deputy chief of France’s police union Alliance.

Hollande called for “unity” in the country and rejected opposition calls to further harden anti-terrorism legislation.

“Restricting our freedoms will not make the fight against terrorism more effective,” he said, adding that changes made to legislation in 2015, and the extension of a state of emergency, already gave authorities sufficient “capacity to act”.

“What the terrorists want is to divide us, separate us, to tear us apart. We must avoid one-upmanship, arguments, conflation, suspicions,” he said.

“This war will be long. Our democracy is the target, and it will be our shield. Let us stand together. We will win this war.”