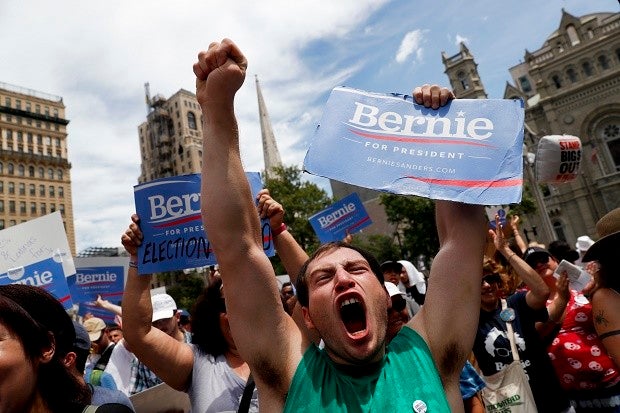 A supporter of Sen. Bernie Sanders, I-Vt., yells during a rally near City Hall in Philadelphia, Tuesday, July 26, 2016, during the second day of the Democratic National Convention. AP

PHILADELPHIA — Bernie Sanders loyalists protested inside and outside of the Democratic National Convention site on Tuesday after Hillary Clinton won the party’s presidential nomination.

Despite Sanders’ calls for them to support Clinton, thousands of activists have taken to the streets during the convention this week to voice support for the liberal Vermont US senator and his progressive agenda.

Moments after Clinton became the first woman to be nominated for president by a major US political party, a large group of Sanders delegates exited the Philadelphia convention site to hold a sit-in inside a media tent. Some had their mouths taped shut. A few spontaneously sang “this land is our land,” and a banner read “we the people.” They said they were holding a peaceful protest to complain about being shut out by the Democratic Party.

“This was not a convention. This was a four-day Hillary party. And we weren’t welcome,” said Liz Maratea, a New Jersey delegate at the media tent protest. “We were treated like lepers.”

In the streets outside, Sanders supporters who had spent the day protesting began facing off with police. Protesters began scaling 8-foot walls blocking off the secure zone around the arena parking lot. An officer sprayed one of the protesters.

Unmoved by Sanders’ plea for party unity, the Bernie or Bust protesters walked miles in the stifling heat again Tuesday to make their case for him.

They held a midday rally at City Hall, then made their way down Broad Street to the convention site. By early evening, a large crowd had formed outside the subway station closest to the arena.

“We all have this unrealistic dream that democracy is alive in America,” said Debra Dilks, of Boonville, Missouri, who spoke as a protest broke up near Philadelphia’s City Hall and wasn’t sure she’ll vote in November. “Hillary didn’t get the nomination. The nomination was stolen.”

The crowd consisted of an assortment of protesters espousing a variety of causes, but mostly Sanders supporters and other Clinton foes on the left. College student Cory James said he expects the Democratic Party to split over the nomination.

“I suspect we are witnessing an event that will fundamentally change American politics,” said James, of Flint, Michigan.

Earlier in the day, participants at the rally charged that Sanders was cheated out of the nomination, and they said they weren’t swayed by his Monday plea to his supporters to fall in line behind Clinton for the good of the country.

“He persuaded no one to vote for Hillary,” said Greg Gregg, a retired nurse from Salem, Oregon, who intends to cast his ballot in November for Green Party candidate Jill Stein.

READ: Sanders says Clinton ‘must become’ next US president

The longstanding bitterness between Sanders’ supporters and Clinton’s seemed to grow worse over the past few days after a trove of hacked emails showed that officials at the Democratic National Committee played favorites during the primaries and worked to undermine Sanders’ campaign.

“They really agitate people more every time they stand up and do the Hillary Clinton hoo-rah hoo-rah,” he said.

With temperatures climbing again toward the mid-90s, Chris Scully, an engineer from Troy, New York, held a “Jill Before Hill” sign outside City Hall and said he opposes Clinton because of her war record as US secretary of state.

As Scully spoke, a passer-by called out: “That’s a vote for Trump!”

In a separate protest, against police brutality and racial injustice, about 500 people marched down Broad Street to City Hall. Protest leader Erica Mines told the crowd it was an “anti-police rally” and a “black and brown resistance march” and instructed all white people to move to the back.

March participant Tiara Willis, of Philadelphia, said she subscribes to the slogan “I’m with her … I guess.” She said she won’t back Trump and called Clinton “the lesser of two evils.”