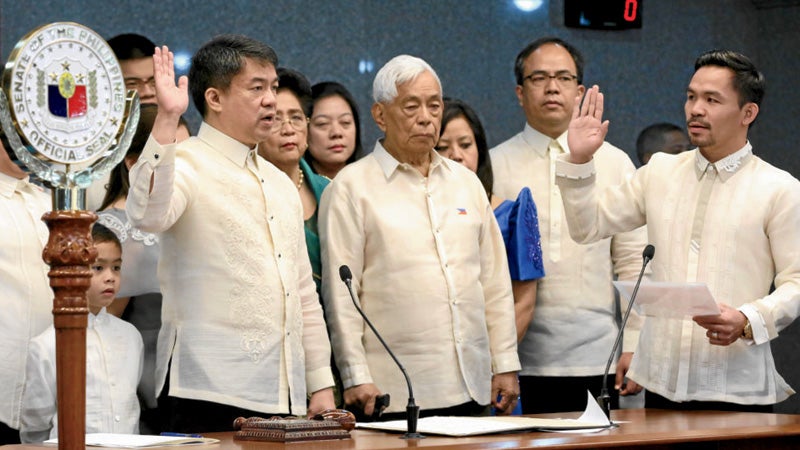 Pimentel’s rise to the Senate presidency may have seemed a long shot back during his first term, when Pimentel had to fight for the 12th and last slot in 2007, protesting the victory of Sen. Juan Miguel Zubiri. Zubiri was forced to resign in 2011, giving way to Pimentel, as the former faced and denied cheating allegations against him.

On Monday, such bitter history seemed decades away: Zubiri was among the majority who backed Pimentel’s bid for leadership, even seconding the nomination of his fellow Mindanaoan.

The returning senator was first to point out the Pimentels’ feat in his nomination speech: “Senate President Pimentel… is also making history for being the first son to repeat his father’s achievement in holding that position. No other father and son had held the position of Senate President in the 100-year history of the Senate.”

Pimentel gave his father, former Senate President Nene Pimentel, special mention “for inspiring me to become a senator and for inculcating in the aptitude of focusing on the people, their problems and their needs.”

The elder Pimentel briefly spoke to reporters about his son’s achievement.

Reelected Sen. Ralph Recto was installed as minority leader, joining Senators Francis “Chiz” Escudero and Antonio Trillanes IV, both defeated vice presidential candidates, in the bloc. He is the lone LP member in the minority. TVJ

No stopping glam and glitz in Sona