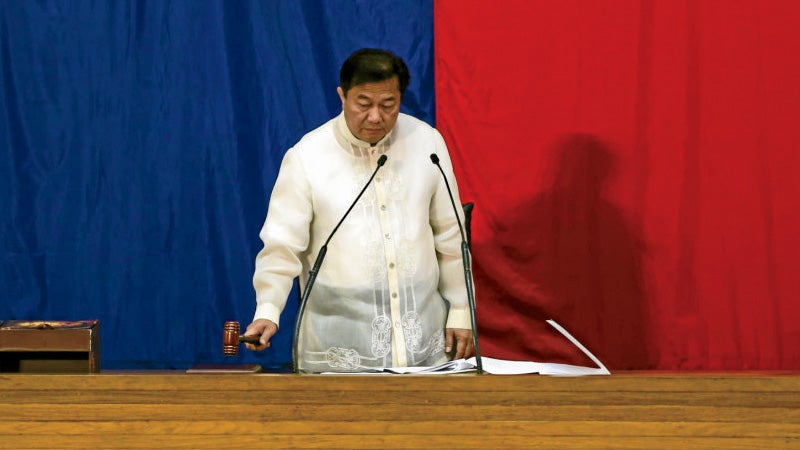 THE MAN, who convinced President Duterte that his destiny was in Malacañang, is now his point man in Congress who will ensure his policy of change will be supported by laws.

Davao del Norte Rep. Pantaleon Alvarez was elected Speaker by 86 percent, or 251 of the 292 members of the House of Representatives in the 17th Congress.

With a supermajority,  Alvarez said he was sure his legislative agenda, which he unveiled during yesterday’s opening session, would be approved.

Alvarez, who spent one term as representative in the 11th Congress before he was appointed transportation secretary under the Arroyo administration, has picked Ilocos Norte Rep. Rodolfo Fariñas as   his majority leader.

“We in the legislative branch of government have our work cut out for us. We must give the President the necessary legislation which will be his tools to effect meaningful and genuine change. In sum, we too must be instruments of change,” he said.

His legislative agenda in his first year as Speaker are:

“We must reimpose the death penalty for  heinous crimes,” said Alvarez, who noted that among members of the Southeast Asian Nations, only Cambodia and the Philippines have no capital punishment.

Alvarez has a simple take on the death penalty. “If you take a human life, especially if you do it deliberately and with premeditation, you must pay with your life,” he said.

Amend the Juvenile Justice Law and bring back the minimum age of criminal responsibility to 9 years old.

He said that this would not be a “throwback to a barbarian age,” noting that Singapore and the United States have the minimum age set at 7 years old.

“Coddling teenagers by making them immune from crimes they commit will only breed a culture of impunity,” the Speaker said.

Grant emergency powers to Mr. Duterte to solve the traffic crisis in Metro Manila and Cebu province in two years.

He said at least P2.4 billion was lost every day to traffic congestion not to mention the lost time that should have been better spent with family and/or in the workplace.

“Unlike a free-size shirt, the Procurement Law should not be a one-size fits all kind of law. We should put in enough   flexibility to address all foreseeable possibilities that may   arise in the course of government procurement,” Alvarez said.

Pass the freedom of information bill.

“The greatest crimes are committed in dark secrecy,” he said.

“Tax laws have become so complicated that they are exploited by corrupt BIR officials in order to extort money from the taxpayers. Ordinary individuals, for their part, choose not to pay taxes precisely because they do not understand tax laws,” he said.

Alvarez said he would rather have a congressional body revoke the franchises instead of the “bribable bureaucrat.” Mining firms would be allowed to have semi-processed or processed metals to enrich not only big-time stockholders.

Allow absentee voting for senior citizens and persons with disability.

Amend the 1987 Constitution to shift to a federal form of   government.

Alvarez called this “the most holy grail of all” of his legislative goals. TVJ