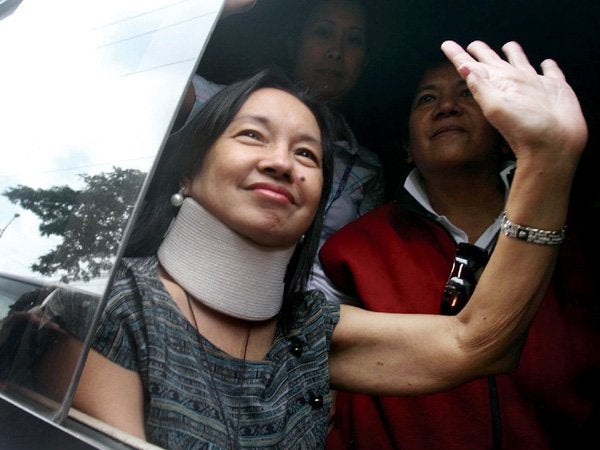 Former President Gloria Macapagal-Arroyo walked free from nearly five years of hospital detention yesterday, two days after the Supreme Court ruled that the Aquino administration had failed to produce evidence to convict her of diverting charity funds to her personal use.

Arroyo, who was recently reelected to a third term as Pampanga representative, received her release papers from the Sandiganbayan after the high tribunal’s ruling was released earlier in the day saying the antigraft court erred in its findings that the former President personally benefited from intelligence funds of the Philippine Charity Sweepstakes Office (PCSO).

A convoy whisked the 69-year-old Arroyo out of the Veterans Memorial Medical Center compound at nightfall, past reporters and TV camera crews who had gathered at the gate for hours. The lawyer said Arroyo proceeded to her La Vista Subdivision home and was to see doctors at St. Luke’s Medical Center for medical treatment.

Arroyo, who is suffering from severe cervical spinal problems, in a statement on Tuesday vowed to go after her tormentors.

She was depicted as the face of corruption by former President Benigno Aquino III, who did not miss a chance in local and international forums to denounce her nine-year rule.

Arroyo had ordered the dismantling of the Aquino family’s Hacienda Luisita, saying that a stock distribution option that allowed the sprawling estate exemption from the agrarian reform program of his mother, the late President Corazon Aquino, did not improve the lives of its farmers.

In a statement yesterday, Aquino lamented the court ruling, saying that there was nothing in the PCSO charter allowing the disbursement of funds for antiterrorism campaigns.

The court’s 11-4 vote was announced by a court spokesperson on Tuesday. The text of the decision was released only yesterday and was sent to the Sandiganbayan for promulgation.

In the 48-page main decision posted on its official website, the Supreme Court said the Sandiganbayan had “completely ignored the failure of the information to sufficiently charge conspiracy to commit plunder … and ignored the lack of evidence establishing the corpus delicti (body of the crime) of amassing, accumulation and acquisition of ill-gotten wealth in the total amount of at least P50,000,000.00 through any or all of the predicate crimes.”

“Grave abuse of discretion means such capricious or whimsical exercise of judgment which is equivalent to lack of jurisdiction,” the court held, “exercised in an arbitrary or despotic manner by reason of passion or personal hostility.”

The prosecution’s main evidence hinged on an “OK” that Arroyo had written on requests for fund releases.

The tribunal dismissed the prosecution’s “conspiracy” theory, declaring that this “exists when two or more persons come to an agreement concerning the commission of a felony, and decide to commit it.

“In her case, GMA points out that all the state showed was her having affixed her unqualified ‘OK’ on the fund releases requested,” said the ruling, using Arroyo’s initials.

“She argues that such act was not even an overt act of plunder because it had no immediate and necessary relation to plunder by virtue of her approval not being per se illegal or irregular,” it added.

The court said “the treatment by the Sandiganbayan of her handwritten unqualified ‘OK’ as an overt act of plunder was absolutely unwarranted considering that such act was a common legal and valid practice of signifying approval of a fund release by the President.”

“Here, considering that 10 persons have been accused of amassing, accumulating and/or acquiring ill-gotten wealth aggregating P365,997,915.00, it would be improvable that the crime charged was plunder if none of them was alleged to be the main plunderer. As such, each of the 10 accused would account for the aliquot amount of only P36,599,791.50.50, or exactly 1/10 of the alleged aggregate ill-gotten wealth, which is far below the threshold value of ill-gotten wealth required for plunder,” it said.

Chief Justice Maria Lourdes Sereno dissented, along with Justices Antonio Carpio, Marvic Leonen and Benjamin Caguioa. Carpio was an Arroyo appointee, the three others were Aquino’s.

At a little before 4 p.m., the Sandiganbayan’s First Division issued the order allowing Arroyo and her coaccused, Benigno Aguas, to walk free after the Supreme Court process server personally handed a copy of the court’s decision.

The Sandiganbayan, which retained custody over the accused even though their case was elevated to the Supreme Court, noted the high court’s ruling dismissing the plunder charges against Arroyo and Aguas and ordering their immediate release.

Tang declined to comment on criticisms raised against the Sandiganbayan in the Supreme Court ruling.

“Since the Supreme Court is the highest court of the land and the final arbiter of all justiciable issues, the Sandiganbayan is duty-bound to respect and abide by it,” she told reporters. With reports from Maricar Brizuela, DJ Yap, Jerome Aning and Estrella Torres/TVJ