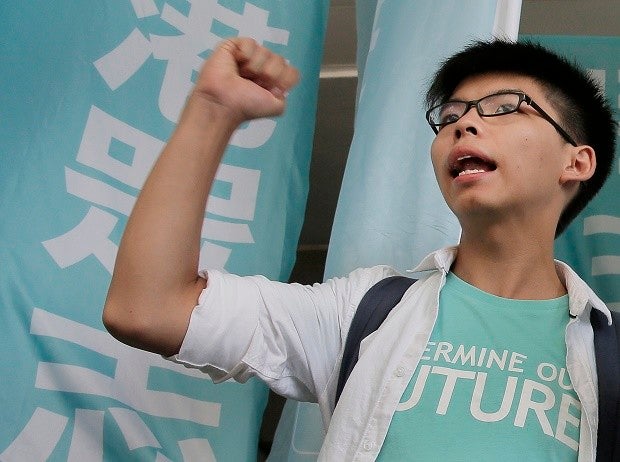 The 19-year-old Wong tweeted that he “was found guilty of the charge of participating unlawful assembly by court of Hong Kong.”

A magistrate handed down the verdict for Wong and two other young student leaders, Nathan Law and Alex Chow, following a trial earlier this year.

Chow was convicted of the same charge while Law was found guilty of inciting others to join an illegal assembly, according to local media reports.

The three face up to two years in prison. They’re due for sentencing on Aug. 15 said Wong, who became globally famous for his role in leading the protests, which marked the former British colony’s most tumultuous period in decades.

“We might need to go into prison. However, no matter what is the penalty or the price that we need to pay, we will still continue to fight against suppression from the government,” Wong told reporters after the verdict. “Facing the largest communist regime in the world, it’s a long-term battle for us to fight for democracy.”

The three were charged with storming into a courtyard dubbed Civic Square beside the Hong Kong government complex on Sept. 26, 2014, to protest Beijing’s decision to restrict elections for the semiautonomous region’s top leader.

They and dozens of other young activists climbed a tall fence or rushed past a barricade surrounding the square, which had been open to the public until the government cut off access months before.

Huge crowds of demonstrators turned out to demand their release after they were detained by police, who responded two days later with volleys of tear gas. The move backfired, driving even more protesters to take to the streets, where they remained for 79 days to press their demands for greater democracy in what became known as the Umbrella Movement.

It’s the first conviction for Wong, who has been involved in several other court cases this year. Last month he was acquitted of obstruction charges stemming from a separate anti-China protest earlier in 2014. He’s also involved in a contempt case still before the courts.

Amnesty International criticized Hong Kong’s Public Order Ordinance, on which the prosecution based its case, noting it has been criticized by the United Nations Human Rights Committee for not meeting international human rights law and standards on the right of peaceful assembly.

“The prosecution of student leaders on vague charges smacks of political payback by the authorities,” said Mabel Au, the group’s Hong Kong director.