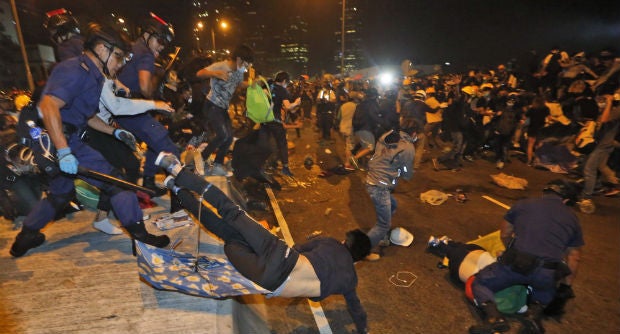 Joshua Wong’s announcement came after protesters carrying umbrellas – which have become symbols of the pro-democracy movement – battled police armed with pepper spray, batons and riot shields for hours overnight before being driven off a main road outside the complex at dawn.

The government complex was forced to shut temporarily and the city’s Beijing-backed leader said public patience was wearing thin, adding that police would “continue to take decisive action to enforce the law.”

Student leaders conceded that their attempt to escalate their movement had failed. With options running out, the 18-year-old Wong announced at a rally late Monday that he and two other members of his group would go on an indefinite hunger strike to press demands that the Hong Kong government drop restrictions on inaugural 2017 elections for the city’s top leader.

Wong leads Scholarism, one of two student groups that have played key roles organizing the protests that have occupied major streets around the city for two months.

Hundreds of protesters overran police lines Sunday night as they tried to block traffic on a main road, but were stopped by police barricades from going down a side road to Chief Executive Leung Chun-Ying’s office.

The protesters, many wearing surgical masks, hard hats and safety goggles and chanting, “I want true democracy,” said they wanted to occupy the road to prevent Leung and other government officials from getting to work in the morning.

At one point after midnight, police charged the crowd, aggressively pushing demonstrators back with pepper spray and batons, after some protesters started pelting them with water bottles and other objects. Police later fell back, letting demonstrators re-occupy the road. At dawn, police charged again and cleared the protesters from some areas around the government headquarters.

Police spokesman Steve Hui said 40 protesters had been arrested while 17 officers were injured, but did not give a total injury count.

“Radicals and troublemakers were found in between the crowd who created chaos deliberately,” he said.

Protesters said they were taking action to force a response from Hong Kong’s government, which has made little effort to address their demands that it scrap a plan by China’s Communist leaders to use a panel of Beijing-friendly elites to screen candidates for Hong Kong’s leader in inaugural 2017 elections.

Leung told reporters that police patience should not be interpreted as weakness.

“If this can be tolerated, what cannot?” he said.

Hundreds remain entrenched in the main downtown protest site, building tents, work tables and other infrastructure, even as energy has diminished on the streets since the first surge of demonstrations in late September. Numbers typically dwindle in the daytime, with many protesters going to work or school before returning in the evenings.

Authorities last week used an aggressive operation to clear out the protest camp on the busy streets of Hong Kong’s crowded Mong Kok district, one of three protest zones around the semiautonomous city. Hui said 12 more people were arrested in the district as they tried to retake the streets.

“The action was aimed at paralyzing the government’s operation,” said Alex Chow, secretary general of the Hong Kong Federation of Students. But he later told reporters that effort had failed.

In Washington, State Department spokeswoman Jen Psaki on Monday reiterated a U.S. call for restraint by authorities and said it would be concerned by any “increase in aggression.” She also urged protesters to express their views peacefully.