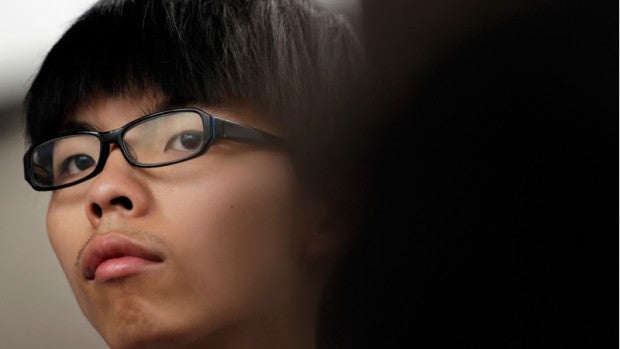 FACE OF PROTEST MOVEMENT. Joshua Wong, a student leader in the Occupy Central movement, listens to a speech delivered by a fellow student leader at a protest site near the government headquarters in Hong Kong Saturday, Oct. 4, 2014. Wong–a 17-year-old firebrand who has become one of the faces of the protest movement–made a rallying cry in Admiralty for demonstrators to continue occupying the business district. Hong Kong protest leaders said late Monday they had agreed to hold talks with the government as their numbers dwindled and they faced growing pressure to end their pro-democracy sit-in. AP PHOTO

HONG KONG, China—Hong Kong student leader Joshua Wong slammed police Thursday for what he called a “political prosecution” after he was charged over protests which led to last year’s mass pro-democracy street rallies.

Wong, 18, who became the face of the democracy movement, is already due in court Friday for separate charges of obstructing police at an earlier demonstration.

The teenager and other activists have accused the authorities of a witch hunt against those at the forefront of the Umbrella Movement that brought parts of the city to a standstill for more than two months.

Protesters called for fully free elections of the city’s next leader, in the face of a contentious Beijing-backed political reform package in which candidates would have been vetted by a loyalist committee.

That bill was vetoed in June in an unprecedented rebuke to Beijing, leaving the city politically polarized.

The charges relate to a student protest on September 26 last year during which some climbed into a square which is part of the city government complex.

Wong and other activists were arrested, sparking wider demonstrations which exploded two days later when police fired tear gas to disperse the crowds.

Thousands more took to the streets in the wake of what they saw as heavy-handed policing.

“Today… is political prosecution,” said Wong before he entered a police station Thursday in the central neighborhood of Wan Chai.

“Being involved in the civic square action is the best mission I have made in the four years I’ve been involved in social student movements,” he said.

“I will not regret it… even if I have to pay the price.”

When they emerged less than two hours later, Wong’s lawyer Michael Vidler confirmed the teen had been charged.

“I think the whole rationale for proceeding at this stage, a year after the event, is totally flawed,” Vidler said.

“In my view, it’s a clear abuse of process.”

Student leader Nathan Law was charged with inciting others to take part in an unlawful assembly.

Around 40 supporters outside the police station held up yellow umbrellas—symbol of the democracy movement—and shouted “CY step down!” referring to the city’s unpopular leader Leung Chung-ying.

Wong and Law, 22, were brought to court last month on separate charges of obstructing police at an earlier protest in June 2014.

They were among dozens who had gathered outside Beijing’s representative office in Hong Kong to oppose a “white paper” from China that asserted its control over the semi-autonomous city and a reproduction of the document was burned.

Both pleaded “not guilty” to those charges and will appear in court Friday for the next hearing in the case.