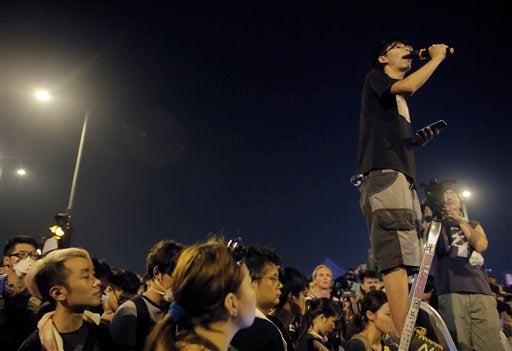 HONG KONG — Hong Kong’s embattled leader refused to step down Thursday, as pro-democracy protesters have demanded, and instead offered talks to defuse a week of massive street demonstrations that are the biggest challenge to Beijing’s authority since China took control of the former British colony in 1997.

Student leaders of the protests did not immediately respond to the announcement by Chief Executive Leung Chun-ying. A wider pro-democracy group that joined the mass protests, Occupy Central, welcomed the talks but insisted that Leung still should resign.

Occupy Central “hopes the talks can provide a turning point in the current political stalemate,” it said in a statement. “However, we reiterate our view that Chief Executive Leung Chun-ying is the one responsible for the stalemate, and that he must step down.”

Leung made his comments at a news conference just minutes before a deadline that had been set by the protesters for him to quit.

Lam, standing beside Leung, said she would seek to meet with student leaders of the protests as soon as possible.

“I hope both sides will be satisfied,” she said. “Students had wanted a public meeting but I hope that we can have some flexibility to discuss details.”

The protesters want Beijing to reverse its decision that all candidates in an inaugural 2017 election for chief executive must be approved by a committee of mostly pro-Beijing elites. They say China is reneging on its promise that the city’s top leader will be chosen through “universal suffrage.”

Before Leung’s announcement, the heads of two major universities whose students joined in launching the protests appeared before a jittery crowd massed in front of the entrance to the leader’s office and appealed for calm.

Afterward, the atmosphere was palpably calmer, but many protesters expressed disappointment.

“They didn’t mention anything about when they are going to talk, no details, nothing,” said Joanna Wong, 28, who works in the aviation industry. Wong said she would stay at the protest site to see how the student groups react to the announcement.

“If we need to wait two or three days, the crowd will become smaller and there will be fewer people to support this movement,” she said. “That’s why the government just keeps us waiting.”

Earlier in the day, police brought in supplies of tear gas and other riot gear, and the protesters prepared face masks and goggles as tensions rose in the standoff outside the imposing government compound near the waterfront.

Police warned of serious consequences if the protesters tried to surround or occupy government buildings, as they had threatened to do if Leung didn’t resign by the end of Thursday.

Leung said shortly before midnight that the authorities would continue to tolerate the protests as long as participants did not charge police lines, but urged them to stop their occupation of much of the downtown area.

“I urge students not to charge into or occupy government buildings. … It’s not about my personal inconvenience,” he said. “These few days the protesters’ occupation of key areas of the city has already seriously affected Hong Kong’s economy, people’s daily lives and government functioning.”

The People’s Daily, published by China’s ruling Communist Party, warned in a commentary Thursday of “chaos” in the city of 7 million and expressed strong support for Leung.

It said the central government firmly backed the Hong Kong police — who were criticized for using tear gas against protesters last weekend — “to handle illegal activities in accordance with the law.”

Ivy Chan, a 25-year-old social worker, said she hoped the proposed talks would yield results and that tear gas wouldn’t be used again.

“What we want to fight for is our freedom, and the free nomination of candidates for our chief executive,” she said.