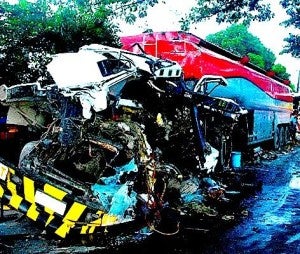 ILOILO CITY — Seven persons, including a four-year-old boy, were killed while eight others were injured when a 10-wheeler truck slammed head-on a passenger jeepney in Barotac Nuevo town in Iloilo, Wednesday afternoon.

All of the fatalities were on board the jeepney, which appeared like a crumpled tin sheet based on videos and photos posted on social media. The force of the impact also threw the victims away from the jeepney along the national highway in Barangay Licoan in Barotac Nuevo, about 32 kilometers northeast from here.

Two other female fatalities, both in their 20s, remained unidentified as of Wednesday evening.

Six of the victims were pronounced dead on arrival at the Don Jose Salazar Monfort Memorial Hospital in Barotac Nuevo. Chona died around 6 p.m. at the hospital, according to Seloso.

Seloso said the truck, which was on its way from Anllao town to Barotac Nuevo, tried to overtake a passenger bus but failed to return to its lane. It slammed the jeepney, head on, as it was going in the opposite direction.

The injured included Blake Alpar, the truck driver and his two helpers and five other jeeney passengers.

Alpar who suffered a broken leg and cuts in the head was placed under hospital arrest at the Western Visayas Medical Center in Iloilo City where most of the injured were taken.

The driver would be charged with  reckless imprudence resulting in multiple homicide, physical injuries and damage to properties, Seloso said.  SFM