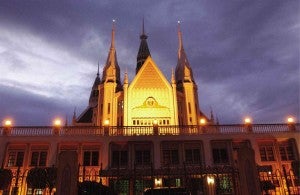 MANILA — The lawyer of expelled Iglesia ni Cristo (INC) siblings Angel Manalo and Lottie Manalo-Hemedez ended up in the hospital on Tuesday night after security personnel and men in masks reportedly assaulted her and two other companions when they responded to a call for help of her clients at their 36 Tandang Sora home in Quezon City.

Lawyer Trixie Angeles said she got a call from her clients on Tuesday night, saying that security personnel and masked men were trying to enter their residence to serve a summon.

“I went there but the guards would not let me in. I was not forcing myself in but was asking them that I wanted to see my clients,” Angeles recalled the incident that happened around 8 p.m.

She noted that she saw a backhoe trying to destroy the outer fence of the residence while about 60 masked men and additional security personnel surrounded the area.

“I was asking them where their court order was when somebody pushed me and my two companions to the ground,” the lawyer added.

Angeles said the masked men kicked, punched and even handcuffed her two assistants. She added that the security personnel even told them that they would get hurt if they insisted on entering the property.

The lawyer also lamented the inaction of the policemen present in the area. She claimed they did not help them until one of her female companions was also pushed to the ground and assaulted by the same men.

She said that she was eventually able to ask the security personnel to remove the handcuffs of her companions but decided to leave the place to seek medical help for their injuries. They were brought to the East Avenue Medical Center for treatment.

Angeles said she sustained bruises on her right arms and thigh and a swelling at the back of her head.

“I am still under observation because doctors said it would take a while before head injuries manifest,” the lawyer added.

She noted that as of Wednesday, she still could not meet her clients because of the security in the area.

Asked for the comment on the incident last Tuesday, INC spokesperson Edwil Zabala said their Writ of Replevin was granted allowing them to recover the remaining INC cars inside the property.

“As far as I know, the Quezon City RTC handed the order to the sheriff and we cooperated with him,” he added.