Trump’s party: What to watch on GOP convention’s third day 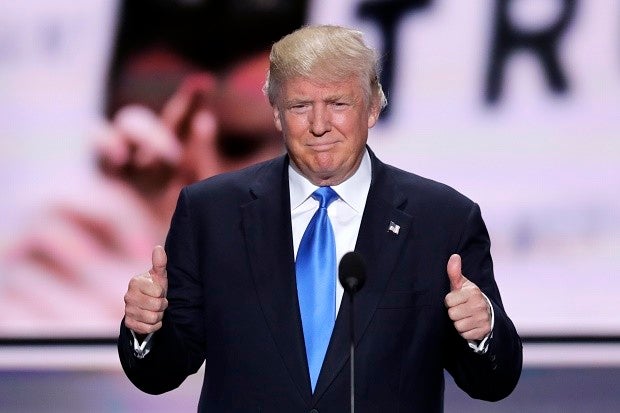 Republican Presidential Candidate Donald Trump flash two thumbs up as he introduces his wife Melania during the opening day of the Republican National Convention in Cleveland, Monday, July 18, 2016. AP

To Trump’s dismay, the first two days saw a rowdy racket on the floor over efforts to quash an anti-Trump rebellion, plus a hubbub over wife Melania Trump’s speech that borrowed passages from Michelle Obama. Yet as the convention reached its halfway point, delegates casting votes in the roll call officially made Trump their presidential nominee.

That clears the way for the GOP to try to focus on showcasing the mogul-turned-showman-turned-politician during speeches and other events on Wednesday — including an address by Trump’s running mate, Indiana Gov. Mike Pence. Another high-profile speech will be by Trump’s former primary rival, Texas Sen. Ted Cruz.

What to watch for on the third day of the convention:

Many Americans will get their first introduction to Pence when he delivers his headline speech. Though he’s served both in Congress and as Indiana’s governor, Pence is largely unknown to the broader public, making his convention address all the more important.

Pence’s selection has helped reassure Republicans who are skeptical that Trump will govern as a true conservative. But Hillary Clinton’s campaign has already declared Pence the “most extreme” vice presidential candidate “in a generation.”

Wednesday’s theme is “Make America First Again.” It’s a theme that evokes American exceptionalism, a concept that has been at the center of a running debate in American politics for some years.

Watch for speakers to wax nostalgic about a time when they’ll say that the U.S. was prosperous, free and full of opportunity. And expect promises to restore America to a position of dominance in the world that they’ll say has been lost.

Day 2 of the convention was largely consumed by controversy over the speech that Melania Trump gave on opening night. Two passages from her speech were nearly identical to ones in the speech that Michelle Obama gave at the 2008 Democratic National Convention, triggering allegations of plagiarism.

Trump’s campaign disputed those allegations but offered no clear explanation for what happened. His aides said the controversy was overblown and urged people to move on. Will the hubbub die down, or will Democrats and others manage to keep it alive?

A trio of former Trump challengers will give speeches on the floor on Wednesday. Things could get awkward.

Wisconsin Gov. Scott Walker has been lukewarm in his support of Trump and criticized his comments about a Hispanic federal judge. Florida Sen. Marco Rubio called Trump a dangerous “con artist” and a fraud during the primary and crudely mocked the size of his hands.

The one to watch is Cruz. The second-highest vote-getter in the primary hasn’t endorsed Trump and has stayed coy about whether he will in his speech. If he doesn’t explicitly back Trump at the billionaire’s own nominating convention, it would be a major blow to GOP unity.

READ: Donald Trump: ‘We are going to win the presidency’

With the convention half over, the massive protests that many Republican leaders had feared have mostly failed to pan out. Though police broke up scuffles between demonstrators Tuesday, demonstrators appeared outnumbered by police officers and journalists. Overall there have only been five arrests since the convention started, and protesters have numbered in the hundreds, not thousands.

Will the demonstrations keep fizzling on Wednesday, or will protesters return with renewed vigor?

A key testament to Trump’s character will come from his son, Eric Trump. The 32-year-old is the executive vice president of his father’s Trump Organization and will speak Wednesday evening.

Though not an experienced political hand, Trump has found himself at the center of his father’s unlikely presidential campaign. He’s appeared frequently on radio and television, and many once-reluctant Trump supporters have said that getting to know his kids has reassured them about his character.

READ: Ivanka and Eric Trump won’t be voting for their father in NY

Read Next
Did Melania Trump ‘Rickroll’ in speech?
EDITORS' PICK
On Day 2 of implementation, gov’t says workers now exempt from ‘no vax, no ride’ policy
Gear up and get ready to play with Yamaha Mio Gear
DOH: 28,471 new COVID-19 cases in PH; active cases now 284,458
Acer starts the year off strong with the Aspire Vero National Geographic Edition
Over 3 Million worth of prizes to be won at Smart Padala’s SENDali Manalo Promo!
Metro Manila posts lowest temperature yet this ‘amihan’ season at 19°C
MOST READ
Cold-case investigation names surprise suspect in Anne Frank’s betrayal
Emma Stone calls Andrew Garfield a ‘jerk’ after he ‘lied’ about his ‘Spider-Man: No Way Home’ appearance
Czech anti-vax singer dies after deliberate infection
Derek Ramsay on being married to Ellen Adarna: ‘Gumaan ‘yung mundo ko’
Don't miss out on the latest news and information.