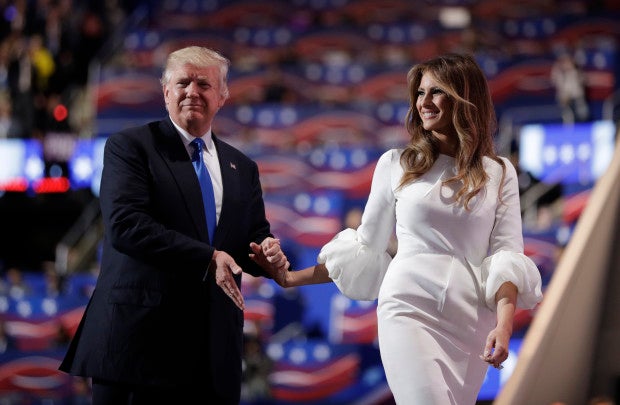 Republican presidential candidate Donald Trump walks off the stage with his wife Melania during the Republican National Convention, Monday, July 18, 2016, in Cleveland. AP

Melania Trump — until now only a minor presence on the campaign trail — found herself in the midst of an embarrassing plagiarism controversy Tuesday after a prime-time defense of her husband Donald that appeared to be lifted in part from a speech given by Michelle Obama.

No sooner had the poised, 46-year-old former model delivered her speech to cheering delegates at the Republican National Convention than the unmistakeable similarities to a passage from Obama’s speech to the 2008 Democratic convention came to light.

In both passages, the women are introducing themselves to the American public by speaking of the values that have shaped their lives.

“My parents impressed on me the values: that you work hard for what you want in life. That your word is your bond and you do what you say and keep your promise. That you treat people with respect. They taught me to show the values and morals in my daily life. That is the lesson that I continue to pass along to our son,” Melania Trump said.

“And we need to pass those lessons on to the many generations to follow. Because we want our children in this nation to know that the only limit to your achievements is the strength of your dreams and your willingness to work for them.”

In her speech, Michelle Obama said:

“And Barack and I were raised with so many of the same values: that you work hard for what you want in life; that your word is your bond and you do what you say you’re going to do; that you treat people with dignity and respect, even if you don’t know them, and even if you don’t agree with them.

“And Barack and I set out to build lives guided by these values, and pass them on to the next generation. Because we want our children — and all children in this nation — to know that the only limit to the height of your achievements is the reach of your dreams and your willingness to work for them.”

Trump’s senior communications adviser, Jason Miller, issued a statement that sidestepped the plagiarism question while not denying it.

“In writing her beautiful speech, Melania’s team of writers took notes on her life’s inspirations, and in some instances included fragments that reflected her own thinking,” he said. “Melania’s immigrant experience and love for America shone through in her speech, which made it such a success.”

The speech was the highlight of a chaotic opening day of a Republican convention that is set to formally nominate her husband as the party’s presidential candidate later this week.

A beaming Trump personally introduced his glamorous, European-born wife to the cheering delegates gathered in Cleveland, breaking with tradition by appearing before his actual nomination.

“It was truly an honor to introduce my wife, Melania. Her speech and demeanor were absolutely incredible. Very proud!” the billionaire tweeted afterwards.

It was a prime opportunity for the potential first lady to step out of her husband’s shadow and tell her immigrant story before the thousands of delegates in the hall, and millions of Americans at home watching on television.

She used the occasion to take some of the rough edges off her combative husband, who has roiled the campaign trail with inflammatory attacks on Muslims, Mexicans and his many political rivals.

“He’s tough when he has to be, but he’s also kind and fair and caring,” Melania Trump said, describing her husband as “intensely loyal” to family, friends, employees and the country.

“If you want someone to fight for you and your country, I can assure you, he’s the guy,” she said.

Born Melanija Knavs in Slovenia — then part of Yugoslavia — to a fashion-industry mother and a car-salesman father, she studied design and architecture before leaving for Milan and Paris to launch her modelling career.

That brought her to the United States in 1996, where two years later she met Donald Trump. She later became his third wife.

On Monday night, she said becoming a US citizen, in 2006, was “the greatest privilege on planet earth.”

Her American experience has certainly been far removed from that of the average immigrant.

Her Twitter account — inactive since Trump declared his candidacy — reflects the privileged lifestyle of a jet-setter traveling between a lavish New York apartment and residences in Florida.

She has tweeted photographs from high-society gatherings and major sporting events, as well as recollections of her red-carpet saunters and charity functions. In each image, Melania appears impeccably dressed.

When Donald and Melania married in January 2005 in Florida, the cost of her Dior dress was estimated at $200,000.

Among the invited celebrities was Hillary Clinton, this year’s likely Democratic presidential nominee.

Initially, Melania did not seem to be entirely on board with the idea of her husband launching a White House bid.

Trump once admitted Melania would have been content as the wife of a billionaire businessman and reality TV star.

“She said, ‘We have such a great life. Why do you want to do this?'” Trump told The Washington Post.