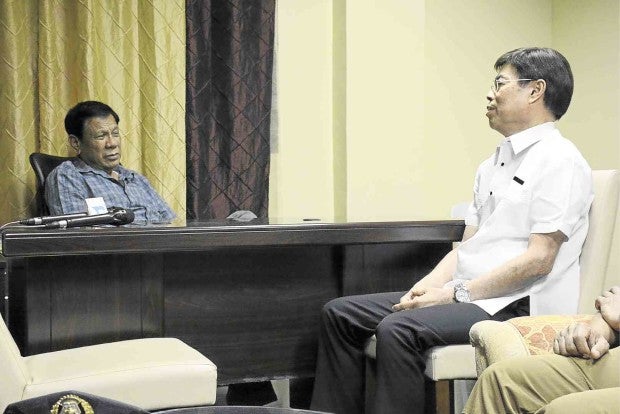 TELL THE TRUTH OR ELSE President Duterte warns Cebu businessman Peter Lim not to lie to him or he will have him killed. Lim sought the meeting with the President to deny that he was the drug lord wanted by the police. He was allowed to go, but told to face NBI investigation. MALACAÑANG PHOTO

President Rodrigo Duterte on Friday met with a Chinese-Filipino businessman he had accused of being one of the country’s top drug lords and threatened to kill him to his face.

In the bizarre meeting at the Philippine Drug Enforcement Agency (PDEA) office in Davao City that evoked scenes from a gangster film, Mr. Duterte warned Peter Lim to steer clear of narcotics.

“I will execute you … I will finish you off,” the President said during the meeting.

Malacañang posted a video of the sitdown on a government YouTube channel yesterday with a caption identifying Lim as “one of the top drug lords in the Triad involved in illegal drug operations in the country.”

But the businessman from Cebu denied that he was the alleged Chinese-Filipino drug dealer Peter Lim, alias Jaguar, who was singled out by the President in an address on national television on July 7.

Peter Lim is a fairly common name in the Philippines, part of whose population claims ethnic Chinese descent.

The Bureau of Immigration last week said there were more than 4,000 people named Peter Lim in its database.

The Peter Lim who met with Mr. Duterte said that since the televised address in which the President said “the moment he steps out of the plane, he will die,” he had feared for his life

“My family is really in a deep problem now in Cebu. We are getting all the threats,” Lim said.

But Mr. Duterte shot back: “I will not say I’m sorry because the reason you’re here is you’re a suspected drug lord.”

The President refused to shake hands with Lim and warned the businessman not to lie to him or he would kill him if he found evidence of his link to the illegal drug trade.

Lim was investigated by the House of Representatives when it looked into the illegal drug trade in 2006.

Mr. Duterte told Lim to get a lawyer and go to the National Bureau of Investigation for questioning and face the people who had accused him.

He told Lim that the government wanted to be fair, that he had nothing personal against him or debt of gratitude to him.

The government is not out to pin down the innocent, the President said.

“We want to help you. Help us clear you,” he told Lim.

Lim, who confirmed that he was investigated by the House when it looked into drug trafficking in 2006, said he understood what Mr. Duterte was saying and thanked the President for seeing him.

He tried to make the President less severe with words of praise.

“Our nation is very lucky to have you, because without you, I don’t know. You’re the only President who could save our nation,” Lim told the President.

The businessman promised to help the government fight illegal drugs in any way he could.

Mr. Duterte asked Lim why he was being linked to drugs.

Lim replied that it could be because of the mention of one Barry Lo, alias Peter Lim, in the newspapers in 2006.

After Lo was named in the news, he said, then Cebu Rep. Antonio Cuenco sought a congressional investigation of the drug trade in which many businessmen from Cebu were allegedly involved.

Mr. Duterte asked what happened after the investigation, and Lim said nothing came out of it.

Mr. Duterte said he would get the evidence presented against Lim, including those presented during his investigation by the House.

“Then we will see. If you didn’t do anything wrong, you open your life and everything. If they have witnesses, you can tell your lawyer to have them summoned. Let them confront you [with their accusations]. We will also watch those people who might be trying to crush you,” the President said.

In his televised address on July 7, Mr. Duterte said Peter Lim was a Triad leader who ran a drug cartel in the Visayas. He said Lim was also known as Jaguar.

“This person is not the Jaguar who was killed in [a police] operation in Las Piñas sometime ago and who was buried in Cebu. This is a different Jaguar,” the President said.

In Davao City, Isidro Lapeña, a retired police official, told reporters yesterday that Lim sought a meeting with the President to deny that he was a drug lord.

Adzhar Albani, director of the PDEA in Southern Mindanao, said Lim “surrendered” to the President, who ordered the businessman to prove his innocence.

Lim was allowed to go after the meeting with the President, Albani said.

But Lim “is not yet off the hook,” he said, adding that the businessman was on the PDEA’s list of drug lords.

“Yes, he is. The Peter Lim that appeared last night is one of those listed as leaders of drug groups in the country. There are other groups … [This] surrender is a very good indication that the campaign of our President against drugs is succeeding,” he said.

Albani acknowledged that there were many Peter Lims in the Philippines, but made it clear that the Peter Lim who met with the President was the Peter Lim from Cebu who, together with his brother Wellington, was investigated by the House in 2006.

The Lims own Hilton Heavy Equipment and other businesses in Cebu.

In a report in a Cebu newspaper, former Representative Cuenco said the House had “found probable cause” for the prosecution of the Lims but the NBI cleared them.

“The National Bureau of Investigation failed to validate the information against the Lim brothers,” Cuenco said in an interview with the Inquirer last week.

Cuenco said the House investigation was prompted by information given to him by the police as then chair of the House dangerous drugs committee.

He said two witnesses who testified against the Lims were killed in 2006 and in 2011.

The witnesses, Bernard Liu and Ananias Dy, worked at the Lim’s heavy equipment business, he said. With reports from Allan Nawal, Inquirer Mindanao; and AFP/TVJ