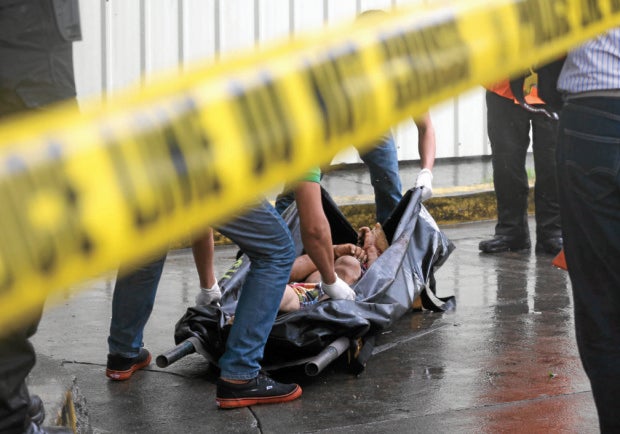 A body of a man suspected to be an illegal drug peddler is found in front of Metropolitan Theather in Manila on July 9. MARIANNE BERMUDEZ

With the police shooting drug suspects dead with more frequency and the bodies of summary execution victims found dumped on the streets almost every day, funeral parlors should be making a killing, right?

But that’s hardly the case—at least for one proprietor who has been into the mortuary industry for years and whose Manila-based business feels the recent spike in the number of “shootout” or “salvage” victims brought in for embalming and related services.

“The fatalities are all from poor families, who could not even afford a decent life and can’t pay for a decent funeral. (With clients like that), our business might just die as well,” said “Carlos,” who agreed to be candid with the Inquirer on the condition that his name and that of his funeral parlor be withheld.

‘You do the math’

“Allow me to be frank here,” Carlos said. “They kill only the poorest of the poor, whose relatives have no means to pay. When these people were still alive, they could buy ‘shabu’ but never had the money to buy a house. With that, I’ll let you do the math.”

If only the police—and the so-called vigilante groups—would “have the balls to kill the rich, the powerful, the mighty, who are very much involved in illegal drugs, too.”

According to Carlos, his funeral parlor—which considers a district of Manila its “territory” or market—attended to 18 cases of crime-related deaths in just a two-week period, from July 1 to 14.

Before those busy days, the shop received only three to six cases—he calls them “medico-legal deaths”—per week.

Things changed after the Duterte administration took over this month. “Grabe, the number tripled!” he said.

But of the 18 bodies brought to his funeral home, only eight have been claimed by the victims’ families as of July 14. And of those families, only two have paid in full for the services; the rest only issued promissory notes.

“Are we earning? Maybe not,” the businessman said.

Based on his experience, aside from issuing promissory notes, poor families who could not pay often approach politicians—from barangay officials and city councilors to mayors and congressmen—who would then “pressure” funeral parlor owners into lowering their rates.

Which adds to “my headaches,” Carlos said, because the bodies of people who suffered violent deaths (shooting, stabbing, hacking or mutilation) often require reconstructive procedures aside from the mandatory autopsy—and therefore should entail additional charges.

“If the body remains unclaimed then we’ll have to shoulder all the expenses. By then, we’ll have to include burial services because under the law we can’t just throw the bodies away,” he said.