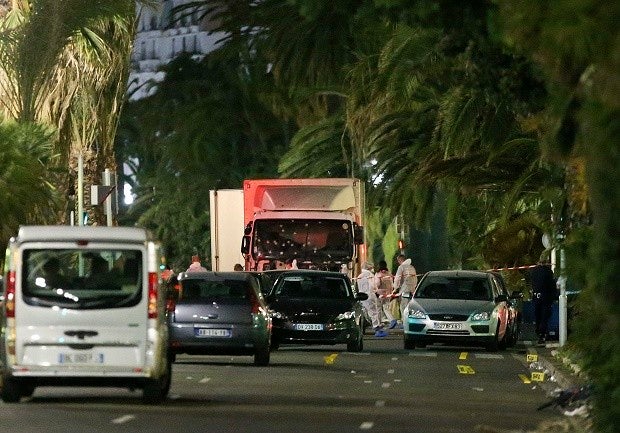 The truck which slammed into revelers late Thursday, July 14, is seen near the site of an attack in the French resort city of Nice, southern France, Friday, July 15, 2016. The truck loaded with weapons and hand grenades drove onto a sidewalk for more than a mile, plowing through Bastille Day revelers who’d gathered to watch fireworks in the French resort city of Nice late Thursday. AP

NICE, France — World leaders are expressing dismay, sadness and solidarity with France over the attack carried out by a man who drove truck into crowds of people celebrating France’s national day in Nice, killing at least 80 people:

President Barack Obama condemned what he said “appears to be a horrific terrorist attack” in Nice.

“Our thoughts and prayers are with the families and other loved-ones of those killed.”

Noting that the attack occurred on Bastille Day, Obama praised “the extraordinary resilience and democratic values that have made France an inspiration to the entire world.”

Secretary of State John Kerry called it a “horrendous attack in Nice. … I was proud to stand alongside French leaders earlier today at Bastille Day celebrations in Paris, and the United States will continue to stand firmly with the French people during this time of tragedy.”

Both presidential candidates also condemned the attacks, with Republican Donald Trump declaring “this is war” and Democrat Hillary Clinton vowing “we will not be intimidated.

Clinton said that “every American stands in strong solidarity with the people of France, and we say with one voice: We will not be intimidated. We will never allow terrorists to undermine the egalitarian and democratic values that underpin our very way of life.”

Trump, who postponed plans to announce his vice presidential pick because of the attacks, said “this is war. If you look at it, this is war coming from all different parts. And frankly it’s war and we’re dealing with people without uniforms.”

European Council president Donald Tusk expressed consternation that France was attacked on its national day and said the world stands united with the French people.

“It is a tragic paradox that the victims of the attack people celebrating liberty, quality and fraternity. We will stand united with the families of victims, the French people and the government in the fight against violence and hatred,” Tusk said at a meeting of Asian and European leaders in the Mongolian capital of Ulaanbaatar.

Premier Li Keqiang said “we strongly condemn terrorism of all forms. We express our condolences to the victims and we will fight all kinds of terrorism.”

Foreign Minister Didier Reynders expressed dismay that France was once again the target of an apparent terrorist attack.

“It has shocked France, it has rocked it to its core,” Bishop told reporters in the Western Australia capital of Perth. “This should have been a time of great national pride and celebration.”

Bishop condemned the violence, saying it was a reminder that “no country is immune from terrorist attacks.”

“We support our friends and partners in France and we join with others around the world in hoping that this will be the end of this type of horrific incident that is targeted at unarmed civilians,” she said.

READ: Nice attack: What we know so far

Foreign Minister Jose Manuel Garcia-Margallo said he called his counterparts in France to express his condolences.

“We are very sorry and very much with the French people and the French government,” he said in at a meeting of Asian and European leaders in the Mongolian capital of Ulaanbaatar.

Prime Minister Taavi Roivs condemned “a terrible attack on innocent people celebrating their national day. Today, we all stand together with the French people.”

Read Next
Sandiganbayan assures Binay it won’t be swayed by politics
EDITORS' PICK
Karding damage to infrastructure at P23M
Bongbong Marcos says PH ‘open for business’ with new Clark Airport terminal
Sierra Madre stands up to Karding, but needs protection vs the humans it saves
Reignite your passion with the vivo Y35
House energy committee chair Arroyo bats for cheap electricity
UNFPA Philippines Career Opportunities
MOST READ
Badoy not with Office of the President, NTF-Elcac, under Marcos admin — solon
Angelica Panganiban ‘duguan, sugatang mom’ one week into breastfeeding
Maja Salvador to star in new ABS-CBN TV series with Richard Gutierrez
Kris Aquino offers help for Lolit Solis’ dialysis needs amid her own illnesses
Don't miss out on the latest news and information.