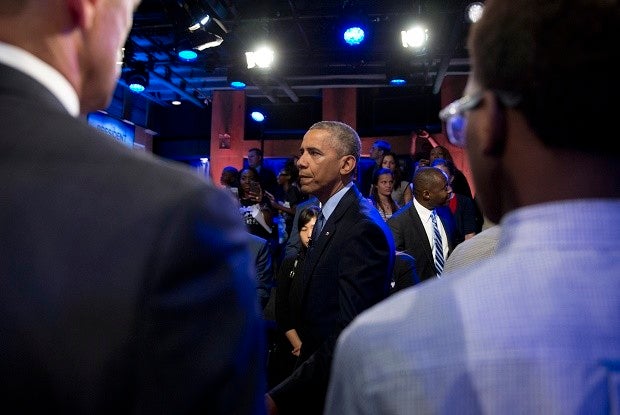 WASHINGTON — The son of the Louisiana man shot dead by police wants President Barack Obama to help end world racism. The mother of a policeman pleads for ways to keep her son safe. A single mom who has sent her son away from a rough Baltimore neighborhood worries over how to keep him safe when he’s home on the weekends.

America’s fraught debate about tensions between blacks and police spilled over Thursday into hang-wringing about societal problems beyond any one person’s capacity to fix — even the president. At a town hall meeting recorded to be broadcast in prime time, Obama cautiously offered suggestions, but no surefire solutions.

The good news, Obama said, is at least people are finally talking about the problems. Calling for “open hearts,” he urged Americans not to cloister themselves in separate corners.

“Because of the history of this country and the legacy of race, and all the complications that are involved with that, working through these issues so that things can continue to get better will take some time,” Obama said.

More time than Obama has left in office, he readily conceded.

As 32-year-old Philando Castile’s funeral was underway in St. Paul, Minnesota, Obama took a question remotely from Diamond Reynolds, Castile’s girlfriend, who livestreamed the aftermath of his shooting by police on Facebook. She said she’s scared for her daughter’s future and asked the president, “What do we do?”

Choosing his words carefully, Obama said it’s key for officers to get to know the community they’re protecting. Also critical, he said, was to better train police to avoid “implicit biases.”

“We all carry around with us some assumptions about other people,” Obama said. If people are honest with themselves, he added, “oftentimes there is a presumption that black men are dangerous.”

He offered a rare reflection on how he felt racism had affected him personally, recalling how as a young boy in Hawaii, a female neighbor didn’t recognize him and refused to ride in the same elevator. “In that sense, what is true for me is true for a lot of African-American men,” he said.

Another questioner, Texas Lt. Gov. Dan Patrick, came with a different viewpoint. He implored Obama to more strongly condemn those who call for killing police, and to grant a national law enforcement group’s request that the White House be lit up with blue lights in solidarity.

In a particularly tense moment at the end of the town hall, the daughter of a man who died in a police confrontation started screaming after being denied a chance to question the president. Erica Garner, daughter of Eric Garner, later met briefly with Obama in private, the White House said.

The question-and-answer session at a Washington theater capped a dizzying week for the president as he sought to connect with the public in a series of hastily arranged appearances: a meeting with police, a summit with law enforcement leaders and Black Lives Matter activists, a trip to Dallas to honor five white officers killed in a revenge attack.

In each instance, Obama has said he’s trying to shift the conversation away from talking points and entrenched accusations of blame, while acknowledging the U.S. is “not even close to being there yet.”

Obama, who cut short a Europe trip after the Dallas killings, has found himself squarely in the middle of the crisis. A reluctant mediator between blacks and the police, he’s avoided explicitly taking sides.

Even still, some law enforcement leaders have accused Obama of scapegoating police. Some of Obama’s critics have even suggested he’s partially to blame for attacks on police.

Obama has long been wary of the expectation that, as the first black president, he’s uniquely qualified to play peacemaker. After George Zimmerman was acquitted of killing unarmed black teenager Trayvon Martin in Florida, Obama called for national soul-searching but suggested he needn’t be the referee.

Instead, he’s tried to encourage more places to adopt policing recommendations developed earlier by his administration. He’s called for assigning police officers to the communities where they live, improving training on how to avoid confrontation, expanding access to statistics about police interactions, and ensuring transparent investigations and due process after deadly incidents.

Yet in a reflection of how the policing issue has unmasked broader inequalities, Obama has also insisted that the problem can’t be solved while African-Americans still struggle disproportionately with joblessness, drugs, poverty, and lack of access to education, health care and healthy food.

“We expect police to solve a whole range of societal problems that we ourselves have neglected,” Obama said. He said prominent incidents sometimes “the catalyst for all the other stuff that may not even have to do with policing coming out.”

Obama has been blunt about the limitations of presidential words or pat policy proposals. Acknowledging “deep divisions” about the right solutions, he predicted this week there would be more tensions “this month, next month, next year, for quite some time.”

To that end, the National League of Cities and U.S. Conference of Mayors called for local officials to hold “100 community conversations race relations, justice, policing and equality.” And in Congress, lawmakers were forming a task force to examine police accountability and aggression toward police.

“I think we need to listen and learn, instead of just starting to throw bombs at each other,” said House Speaker Paul Ryan, R-Wis.