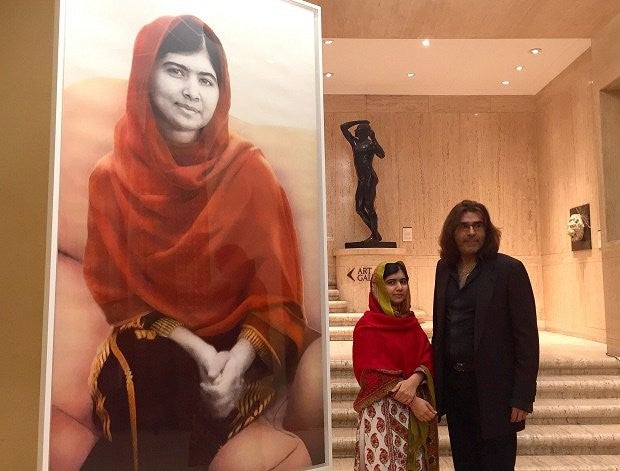 Schoolgirl Nobel Peace Prize winner Malala Yousafzai stands with artist Nasser Azam at the unveiling of a new portrait entitled Malala, at the Barber Institute of Fine Arts, Birmingham, England, Sunday Nov. 29, 2015. Malala narrowly avoided death when she was 15-years old after being shot in the head by a Pakistani Taliban attacker for her outspoken campaigning advocating education for girls. PA via AP

DADAAB, Kenya — Nobel laureate Malala Yousafzai is spending her 19th birthday in Kenya in the world’s largest refugee camp to draw attention to the global refugee crisis, especially as the Dadaab camp faces pressure to close.

Malala’s spokesman, Taylor Royle, said the education activist has been in contact via Skype with a group of girls in Dadaab camp since last year and is looking forward to meeting this group and others

Kenya’s government said Dadaab camp that hosts more than 300,000 mostly Somali refugees will be closed in the next year.

Kenya insists that any returns to Somalia will be voluntary, although the neighboring country is still plagued by conflict.

Many refugees have lived most if not all of their lives in Dadaab, which has been open for 25 years. TVJ