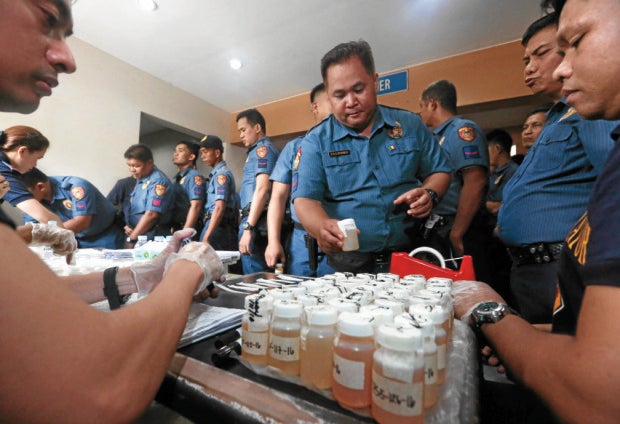 Station 9 police officers take a surprise drug test at the Quirino Grandstand on monday in an effort to clean up not just civilians but also the police force of illegal drug activities. INQUIRER/ MARIANNE BERMUDEZ

Contrary to public perception, a negligible number of policemen are into illegal drugs.

At least that’s the result of a recent random drug testing the Philippine National Police conducted among its personnel nationwide.

Since May until June, only 20 out of 22,238 cops, including police officials, tested positive for drug use, the PNP’s Crime Laboratory announced on Tuesday.

A bulk of the surprise drug testing happened in July, said Aranas.

Most of the cops using drugs were male, with the rank of Inspector down to PO1.

PNP spokesperson Senior Supt. Dionardo Carlos said the results of the test have already been forwarded to the superiors of the errant cops.

Carlos said it will be up to the station commanders, chiefs of police, and regional directors to decide whether they would subject the 20 policemen to summary dismissal for using illegal drugs. JE/rga