Spanish matador gored to death in the ring 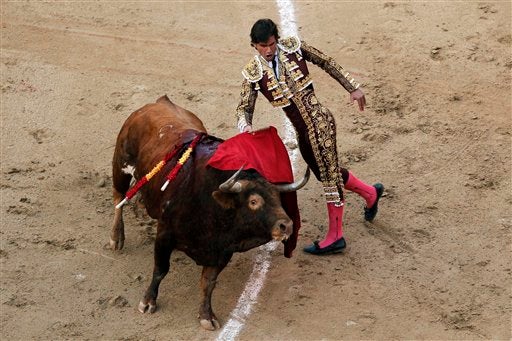 MADRID, Spain — A Spanish bullfighter has become the first to die in the ring in three decades, after being gored in front of horrified spectators during a corrida in the eastern town of Teruel.

Victor Barrio, 29, died Saturday evening of injuries to the chest after being struck by the horn of a bull weighing over 500 kilos (1,100 pounds) and tossed into the air.

Other matadors rushed to the rescue, helping to distract the bull and lure him away while Barrio lay bleeding in the sand.

Barrio, who made his corrida debut in 2008 and toured rings all over the country, was pronounced dead at the scene, Tauroemocion, the organizer of the bullfight, told AFP.

His death is the first of a matador in the ring since 1985, Spanish media reported.