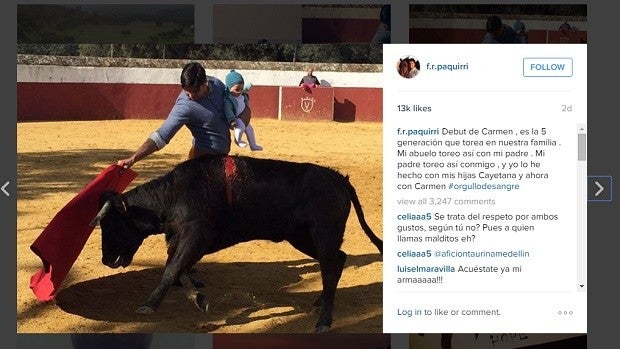 A screengrab from the Instagram page of Francisco ‘Paquirri’ Rivera purportedly shows him warding off a charging bull while he held his baby in his left arm. INSTAGRAM SCREENGRAB

MADRID, Spain — The photo of a famous Spanish bullfighter training in the ring while holding his baby daughter created a stir on Tuesday, sparking an official complaint by a child protection agency.

Francisco “Paquirri” Rivera, who last summer was gored in the groin by a bull but has since recovered, posted the picture on his Instagram account.

“Carmen’s debut, this is the fifth generation that fights bulls in our family,” he wrote.

The picture sparked an immediate uproar in a country increasingly torn between animal rights activists and those who want to abolish Spain’s legendary bullfights, and others who want to keep an age-old tradition going.

READ: American gored by bull in Spain out of intensive care

“We’re totally against instilling violence like that of bullfighting into children,” said Laura Duarte, spokeswoman of Pacma, a party opposed to the mistreatment of animals which backs a total ban on bullfighting.

The controversy forced the child protection agency in the southern region of Andalucia, where Rivera comes from, to respond.

Labelling it “a situation of unnecessary risk for a minor and a decision that we totally reject,” the agency said it had taken the case to juvenile prosecutors.

Rivera himself was quick to respond.

“My daughter has never been safer. I’m a bullfighter, I live for this and I dedicate 365 days a year to it,” he tweeted.

“She didn’t face the slightest danger for even a second.”

Spain’s Bullfighters’ Union also lept to his defense, saying he was up against a young bull and pointing out that bringing children to the ring was a long-held tradition among bullfighters.

The sport has been the focus of ever-increasing criticism in Spain, with several regions or cities banning corridas or annual festivals with bullfights and bull running.

According to the latest official figures, 1,868 bull-related events were held in Spain in 2014.

Combined, they attracted six million spectators in a country of 47 million residents, according to ANOET, the national organization that arranges such events, which said the “bull business” brings in 3.5 billion euros ($3.8 billion) annually.

Rivera himself comes from a long line of bullfighters.

His father was gored to death in Andalucia in 1984.

And his grandfather was Antonio Ordonez, considered one of the greatest bullfighters of all times.