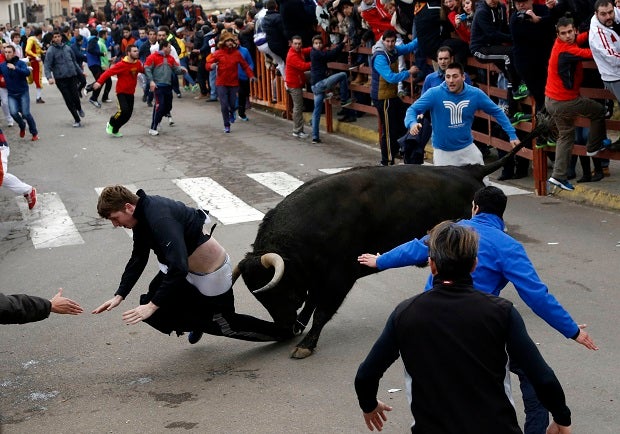 In this photo taken on Saturday, February 14, 2015, Benjamin Miller, 20, from Georgia, in the US, is gored by a bull during the ‘Carnaval del Toro’ in Ciudad Rodrigo, Spain. In another incident in Villaseca de la Sagra, also in Spain, a young man died after getting gored in the neck by a bull he was filming with his cell phone. AP

MADRID, Spain – A Spanish man died Sunday after being gored in the neck while filming a bull run through the streets of a town in central Spain with his mobile phone.

“The young man was on the path of a bull run which he was filming with his mobile phone,” said Jesus Hijosa, mayor of Villaseca de la Sagra, where the accident occurred.

“A bull surprised him from behind and gored him in the neck,” he told AFP.

Villaseca de la Sagra is one of many towns across Spain that host annual festivals where crowds of people run ahead of a herd of bulls.

Another young man was killed during a 2010 bull run in the town.

One of the most famous bull runs is in Pamplona, which was immortalized by US author Ernest Hemingway in his 1926 novel “The Sun Also Rises”.

The 32-year-old man who died Sunday was from a neighboring village and had come with friends to Villaseca de la Sagra on Saturday for the run, the mayor said.

“This sends shivers down our spine… we organize these events as a tradition, so that people can enjoy them, but these things happen,” Hijosa said.

“Bulls are dangerous animals and when there are a lot of people some don’t pay attention… you have to have your wits about you.”

Fifteen people have been killed in bull runs in Pamplona since 1911, where many foreign tourists join in the tradition.