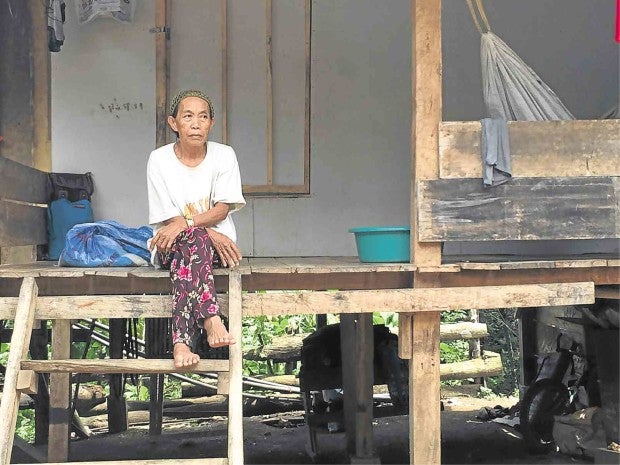 HADJIYA Asjail, a 60-year-old woman from the village of Magcawa in Al Barka town, Basilan, is one of hundreds of residents of three towns in the province who fled attacks by the Abu Sayyaf. Asjail sought shelter in this house behind a school in the town proper of Tipo-Tipo, awaiting government aid.

No official, however, had come to visit the evacuees as of yesterday, according to some residents who fled the fighting on Thursday.

Hadjiya Asjail, 60, resident of Barangay Magcawa in Al Barka town, Basilan, said there was no help from the government since the residents fled.

“I have been here for two days now and we just rely on good neighbors for food,” said Asjail, who had sought shelter in houses of fellow Yakans in Barangay Cabangalan in Tipo-Tipo town.

Abdulbaki Kadari, another evacuee, said the lack of food forced some of the residents to risk getting caught in the crossfire to return to their homes to get supplies.

“We will die here, we cannot wait for them, we need to eat and we feel ashamed relying on our good neighbors,” Kadari said.

Akalun said the immediate need of the evacuees was food and the provincial government needed at least P365,000 initially.

The offensive, a first by Abu Sayyaf in recent years, led to clashes that started on Wednesday evening when at least 200 terrorists attacked the headquarters of the Army’s 18th Infantry Battalion (IB) here.

Authorities said there were brief respites from the clashes.

Joel Maturan, former mayor of this town, said the terrorists, some of whom armed with .50 cal. machine guns, had positioned themselves on four hills surrounding the community of Punoh Butigan in the village of Sungkayot, where the 18th IB headquarters is located.

The terrorists, said Maturan, “seemed to be determined to get the headquarters.”

Maturan said he and his rubber plantation workers had armed themselves to help government soldiers repel the Abu Sayyaf.

The fighting, he said, is “on and off.” But he said he wondered “why these bandits are not running out of ammunition and food.” Julie S. Alipala, Inquirer Mindanao